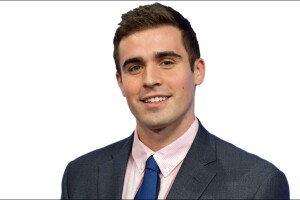 Walter got his career started in Montgomery, Alabama, covering the eventual National Champion Alabama Crimson Tide. Following his stay in Montgomery, Walter ventured into Minor League baseball, where he called play-by-play for the Tennessee Smokies (AA Chicago Cubs). Following the season, Charlie stayed in Knoxville and helped out in WVLT’s sports department.

Walter grew up following the Kentucky Wildcats but admits the few times they’ve played the Cincinnati Bearcats he’s rooted against UK. His favorite Big Blue players are Patrick Patterson and John Wall, with his favorite team of all-time being the ’09-10 team they played for. He also cheers on the Cincinnati Reds and Cincinnati Bengals.

Charlie describes himself as a big “food guy”, and hopes that you can point him to the best cuisine in Lexington before his metabolism slows down. Walter has a Rottweiler mix named Callie and is one of five children in his family.

He’s new to Lexington and would love to hear from you.