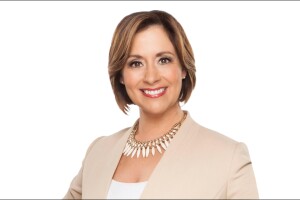 A respected, award winning journalist, Nancy Cox is one of the most recognized and popular anchors in the history of Lexington television.

Beginning as a reporter and producer at WKYT-TV, Ms. Cox came to WLEX-TV in 1992 as a reporter and anchor, quickly moving to the main anchor desk and playing a key role in LEX 18 becoming the Number One Rated Newscast.

Over her 30 year career, Ms. Cox has been honored with the prestigious Edward R. Murrow Award; 4 Emmy Awards; and numerous Kentucky Associated Press Awards including “Best Anchor” honors. She represents her peers as Governor for the National Academy of Television Arts and Sciences Ohio Valley Region, and is currently serving in leadership as Trustee for the National Academy.

Among the many memorable moments in her outstanding career, Ms. Cox covered the first inauguration of President Barack Obama; an exclusive one-on-one interview with Hilary Clinton during her Presidential campaign; the NTSB hearings on the crash of Comair Flight 5191; 19 Kentucky Derbys; several Final Fours and NCAA Basketball Championhips for her life-long favorite Kentucky Wildcats; and a one-on-one interview with legendary UK announcer Cawood Ledford as he bade farewell to his broadcasting career.

She is an in-demand speaker and singer (her Miss Kentucky winning talent) for church and charity organizations. Over the decades Nancy has made hundreds of appearances including hosting every “Go Red” annual fundraing since its inception for the American Heart Association; the Salvation Army; Race for the Cure; and Habitat for Humanity. She has inspired many with her determination while undergoing major back surgeries to correct scoliosis, and is often invited to share her story with civic and religious groups.

Above all her achievements and awards, Nancy’s greatest joy is the blessing of her two wonderful children, son Thomas and daughter Campbell, and the large (10 siblings), supportive family in her hometown of Campbellsville, Kentucky.