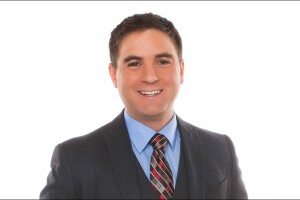 Seth Phillips is the LEX 18 news Sunrise weekend meteorologist. He joined the StormTracker weather team in May of 2016.
Born in the heart of Cajun Country (Lafayette, LA), Seth is no stranger to severe weather. Growing up, hurricanes and tornadoes grabbed his attention and started him on his path to tell the weather story. In the wake of Hurricanes Katrina and Rita, Seth was able to experience first-hand the effects of harsh weather by volunteering at local shelters to help displaced families.
Seth holds two degrees. He earned a Bachelor of Arts with a concentration in Broadcasting from the University of Louisiana at Lafayette, and a Bachelor of Science with a concentration in Broadcast Meteorology from Mississippi State University. Seth Also holds a Broadcast Meteorology Certificate from Mississippi State University.
His career first took him across the country to Medford, Oregon to forecast micro-climates for KDRV NewsWatch 12. There he started as the Weekend Meteorologist forecasting for the first morning weekend newscast in the Rogue Valley. After a year, Seth was promoted to Morning/Midday Meteorologist, delivering forecasts for the morning show and the Emmy Award Winning NewsWatch 12 Midday. In his time in Oregon, Seth forecasted for severe storms, intense snow, and the west’s famous summer fire weather. Seth participated in and placed first in Dancing with the Rogue Valley Stars, a local dance competition and fundraiser that raises money for Sparrow Clubs of Oregon.
Seth is an avid outdoor enthusiast. While not in the StormTracker weather center, you can find him, hiking, biking, running, and skiing. If he is indoors, it’s usually parked in front of the TV watching his LSU tigers, Oregon Ducks, and now the Wildcats, adopting teams everywhere he lives!