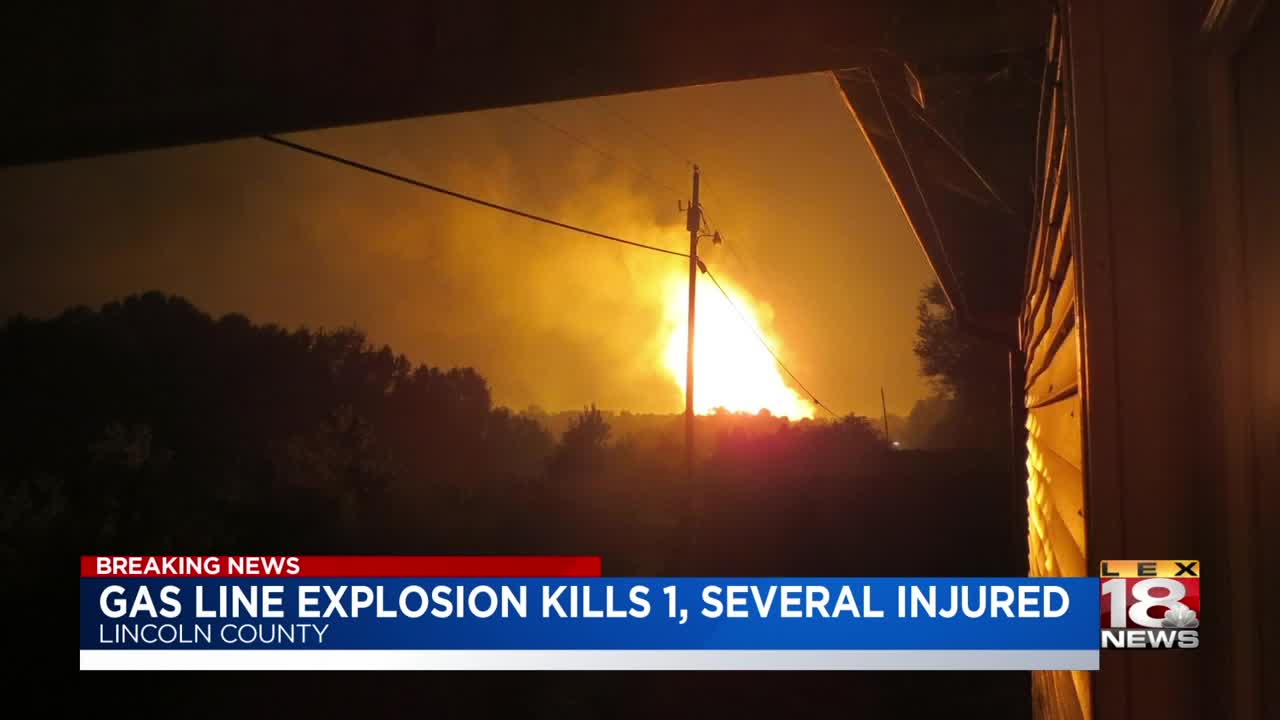 LINCOLN COUNTY, Ky. (LEX 18) — A woman was killed and six other people were injured early Thursday morning in a thunderous gas explosion that sent flames hundreds of feet into the air and sparked an evacuation of nearby residents.

Authorities earlier said five to seven people remained unaccounted for, but Kentucky State Police trooper Robert Purdy said Thursday afternoon that officials had made contact with everyone they were looking for and no other fatalities were expected.

"Which is unexpected," he said, noting that at least five residences were completely destroyed and the large debris field.

Purdy said officials believed Derringer heard the blast and left her home, when she was "overtaken by the heat" of the explosion.

Officials tell LEX 18 that six others were injured.

Purdy said later in a tweet that a Lincoln County deputy risked his life to save an elderly couple from the fire.

A Lincoln County Deputy saved an elderly couple that were outside this residence early this morning.

He said it was so hot he could feel the heat through his windshield and “there was fire everywhere”.

Emergency officials said the cause of the explosion is under investigation. The blast caused six structures to catch fire, officials said. It also heavily damaged train tracks that run through the area, officials said, and Norfolk Southern had dozens of rail cars backed up awaiting a workaround or fix.

The intensity and scale of the fireball shocked local residents.

"Got into my truck, was going up to my girlfriend's house and seen what looked like an atomic bomb going off, basically," said Jerry Sinkhorn. "Seen a big cloud of dust go up and could hear the thrust off of it. I knew what it was. It was a gas line, 'cause I've heard when the last one went off up there at the gas plant."

U.S. Sen. Mitch McConnell took to the Senate floor Thursday to praise the emergency workers who responded to the blast.

"This morning, our prayers are with all the families whom this disaster has touched, and our gratitude is with all the first responders who rushed toward towering flames to protect their neighbors and communities," the Senate Majority Leader said.

. @senatemajldr on the gas pipeline explosion in #Kentucky : https://t.co/zsdL67t45q "My staff & I will continue to stay on top of this & be a resource for everyone affected. Our prayers are with the families whom this disaster has touched & our gratitude is w/ the 1st responders." pic.twitter.com/sRIVCfFGcu

Officials evacuated about 75 people from the nearby Indian Camp mobile home park.

"It woke us up and it was just a big roar and it was fire going up into the sky as far as you could see," said Sue Routin. "Our windows were shaking really bad, and our doors and the ground, you could hear the ground just moving and tumbling and rolling. And then we got to feeling the heat from the fire, so we got in our vehicle and took off to get away from it.

"We thought, he actually thought it could've been an airplane crash, because the rolling was really loud and it was just so bright it lit up the whole, it lit up everything around us."

Officials said early reports mentioned the possibility of an airplane or train crash sparking the explosion but no evidence of such an incident was found at the scene.

Smoke from the blaze could be seen as far as Louisville.

Officials said the gas line -- owned by Enbridge as part of the Texas Eastern Transmission Pipeline -- had been shut off.