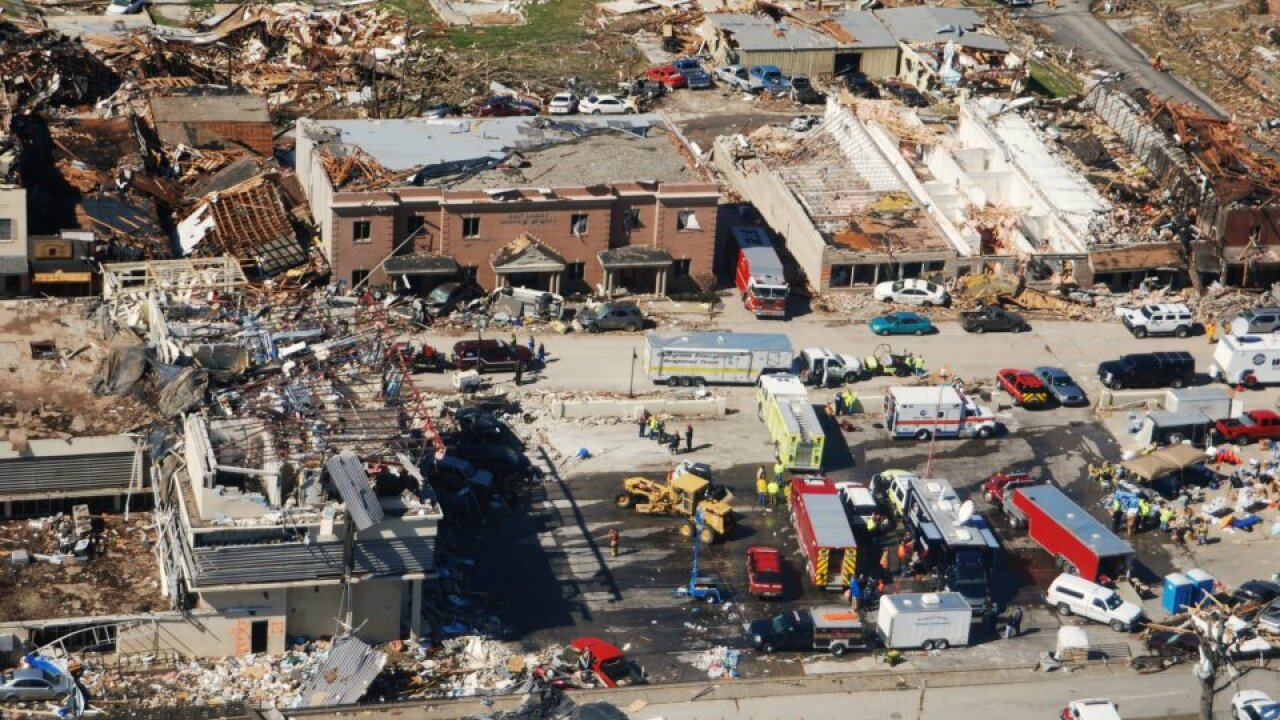 On March 2nd, 2012, 18 tornadoes touched down in Kentucky ranging from EF-0 through EF 4. Ten other states recorded touchdowns that day during a particularly violent storm pattern that swept through the Mississippi and Ohio River Valleys. The storm event that produced the outbreak had an unusual amount of instability formed from a combination of high wind shear and temperatures that exceeded 80 degrees. In addition to the tornadoes that were formed, large hail and damaging wind gusts also cause damage across the region.

In Kentucky, 26 fatalities and over 200 injuries were the result of the outbreak, especially with the long-tracked EF-3 tornado that hit Menifee and Morgan counties and devastated the city of West Liberty.

Below are the summaries of the tornadoes that affected our forecast area:

Touchdown with the West Liberty tornado occurred in Menifee county, southwest of Mariba at 5:39 PM. 19 minutes later, the town of West Liberty was struck and received extensive damage. The tornado continued east through the remainder of Morgan county with a maximum path width of one mile. The tornado then moved into Western Lawrence county before splitting the north and south line of Johnson and Lawrence before moving solely into Lawrence county around 6:18 PM. The tornado weakened a bit and left damage consistent with an EF-1 as it cross through northern Johnson County. It then continued through Lawrence, jumping the Tug fork and continuing through Wayne and Lincoln counties, West Virginia.

The long-tracked Salyersville tornado touched down in southeast Wolfe county before moving through Magoffin, Johnson, and Martin counties. It eventually hopped the Tug Fork into West Virginia, lifting one mile later. The touchdown site in Wolfe County was just southeast of the Burkhart community and displayed damage consistent with an EF-1. However, as the tornado moved through Magoffin and Johnson counties it had strengthened to EF-3 and caused major damage in Salyersville. Maximum wind speeds of 160 mph were likely experienced in Johnson county before the tornado weakened to EF-2 strength when crossing into Martin County. The tornado reached the Tug Fork around 7:38 PM.

The Laurel County tornado got its start at 7:04 PM approximately 5.2 miles west of East Bernstadt. Less than 10 minutes later the tornado lifted around 3.6 miles NNE of East Bernstadt. Several homes were destroyed along the path.

Another short-tracked tornado touched down nearly an hour before the Laurel County tornado. It started near Bath County High School at 6:08 PM and jumped several times before meeting its end 5 minutes later 2.5 miles northwest of Salt Lick, KY. The tornado caused damage to several trees, a barn, and some residential and even crossed I-64 in its path.