Making A Difference: Man Helps Those Struggling With Suicidal Thoughts After Son’s Death

LEXINGTON, Ky. (LEX 18)– After losing his own son to suicide, a Lexington man found new life and purpose in his fight to end the stigma surrounding mental health.

Mark Cain tells LEX 18 that cars have been a constant his entire life and they were a passion he shared with his eldest son, Shelby. But everything changed in 2009 when Shelby died by suicide. 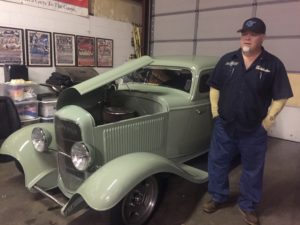 “I never thought that suicide would be a word in my vocabulary,” said Cain.

Cain dealt with his loss the best he knew how until finally, he said he could no longer ignore the little voice in his head telling him to do something.

“Finally, I just got to work one morning and I was like, ‘okay, this is driving me crazy,'” said Cain.

He quit his job and started Shelby’s Way, a non-profit aimed at Mental Health and Suicide Awareness, with a side of hot rods.

“I wanted Shelby’s Way to talk about compassion, empathy, and love,” he said.

Through drag races, car shows, and special builds, Cain brings the message of Shelby’s Way to his community. Shelby’s Way provides financial support and access to mental health care to those who need it.

“If I can change my little piece of pie here in Lexington, and maybe elsewhere, we’ve got to take the time. Conversation is very important,” said Cain. “It don’t make the loss any better, but the more that I talk about it, somehow, just the repetition frees me.”

Shelby’s Way is in need of donations to continue to their mission. To donate or learn more, click here.

If you or someone you know is struggling with thoughts of suicide, call the National Suicide Prevention Hotline at 1-800-273-TALK (8255).