Dorian unleashes fury on the Bahamas, now what? 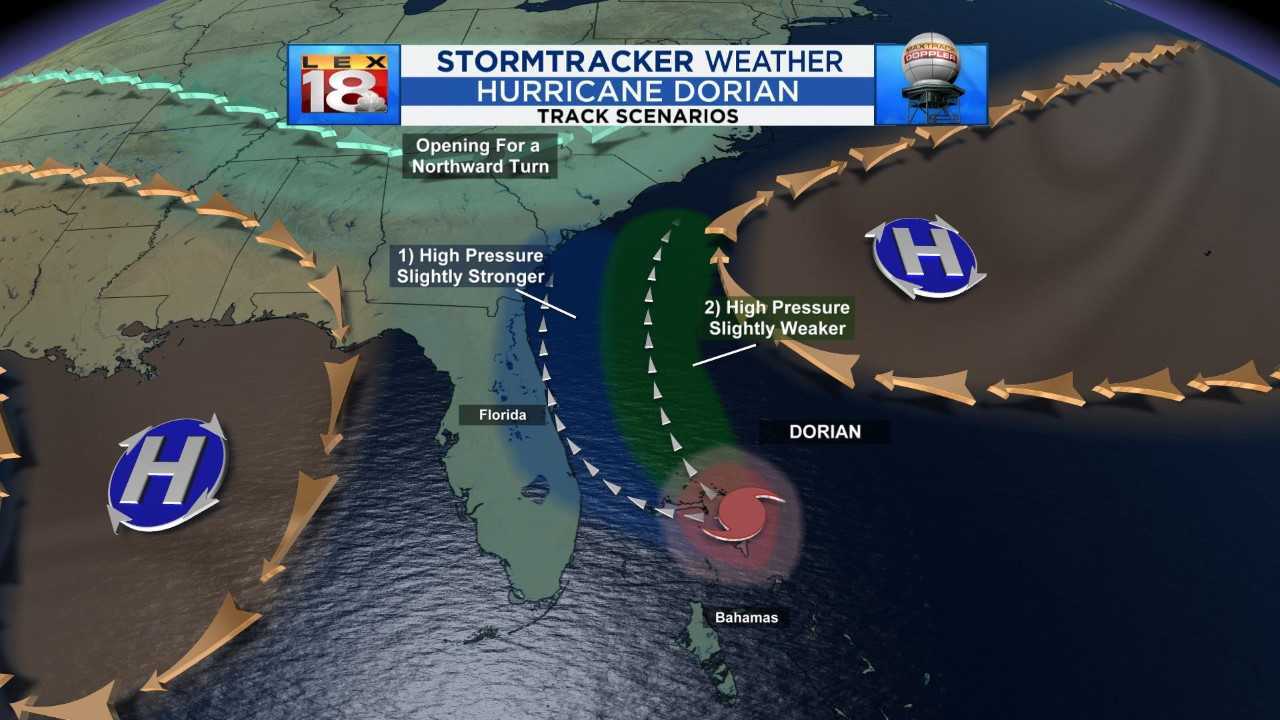 Dorian made landfall as a catastrophic Category 5 hurricane land the Great Abaco Island in the Bahamas. There were maximum sustained winds of 185 mph at landfall, tying the 1935 Labor Day Hurricane for the second strongest Atlantic hurricane landfall. Winds were gusting up to 225 mph(!!) at times Sunday. The winds have already battered the northern Bahamian islands. And Dorian isn't done yet. This powerful storm will continue to crawl through the northern Bahamas on Monday. Some areas could pick up over two feet of rain. There is still uncertainty as to where Dorian will go once it turns north.

More heartbreaking video coming out of Abaco Islands this afternoon as the eye of #Dorian moves over the area presently pic.twitter.com/YpDqVAxBfF

The storm will "thread the needle" in between two centers of high pressure - one over the Atlantic and another in the Gulf. This will create an opening for a northward turn. There are two paths that Dorian could take. One is away from the coast, another that will bum along Florida's Atlantic coast or even make landfall. The track will come down to the strength of the Atlantic high. A stronger high will push the center of Dorian closer to the coast. This would have a greater impact. More of the storm will be over the Treasure Coast. Tropical storm-, even hurricane-force winds could be felt inland. Over half a foot of rain could fall. Rip currents and high surf will be likely. The high could be strong enough to push the center of Dorian onshore.

The second scenario is a little better. Keeping the storm over the open water will lessen the impacts, but will also keep this already devastating storm "fed." Water water is one of the necessary ingredients for tropical development, and to keep a storm sustained. The water in this part of the Atlantic is still very warm. Dorian would weaken, but continue to thrive as a major hurricane even as it approaches the coastal areas of Georgia and the Carolinas.

The forecast from the National Hurricane Center keeps Dorian as a major hurricane (category 3 or stronger) through mid-week as it passes coastal Georgia. How closely it will brush up against the Southeast coast? Still remains to be seen. It's expected to remain a hurricane through late-week as it enters the Mid-Atlantic. It will be another long week of monitoring the track of Dorian. Every mile of movement will make a big difference in the potential impacts. The slow movement won't help matters either. Tropical storm and hurricane watches have already been posted along eastern Florida. Mandatory evacuations have also been issued in South Carolina.