MAE SAI, Thailand (AP) — The Latest on the rescue of a youth soccer team from a flooded cave in Thailand (all times local):

The official heading the Thai cave rescue operation says the four boys brought out of the flooded cave by divers on Monday are “safe and conscious” and now in a hospital.

Chiang Rai acting Gov. Narongsak Osatanakorn also told a news conference that Monday’s operation, which was the second day of a high-stakes rescue effort, took less time than Sunday’s because of the experience accumulated and more people involved.

Eight of the 13 trapped people — a total of 12 boys and their 25-year-old soccer coach — have now been rescued.

Narongsak said he’s not sure if the remaining five people will be extracted in one or more operations.

He said Thailand’s prime minister, who visited the cave site Monday, has gone to visit all eight boys in the hospital

An aide to the Thai Navy SEAL commander says four boys were brought out of the flooded cave in northern Thailand on Monday and the ongoing rescue operation is over for the day.

The aide, Sitthichai Klangpattana, didn’t comment on the boys’ health or say how well the operation has gone.

A total of eight of the 12 boys have now been brought out of the treacherous cave system by divers, including four who were brought out on Sunday, when the rescue operation began.

The boys and their 25-year-old coach became trapped on June 23 after heavy rains flooded the kilometers-long cave network made up of caverns connected by tight passages. 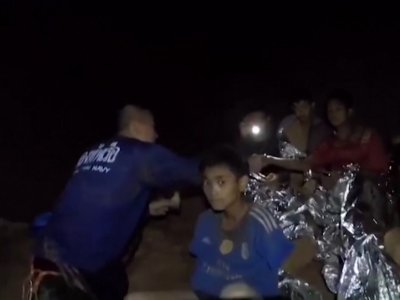 Rescuers in northern Thailand have extracted four members of a youth soccer team from the cave where they had been trapped for more than two weeks. (July 8)

A total of four ambulances have left the area around the flooded cave in northern Thailand where members of a youth soccer team have been trapped for more than two weeks, suggesting eight of the 13 trapped people have now been extracted.

Thai officials have been tight-lipped about the rescue operation, and would not comment on how many people were removed Monday.

On Sunday, teams of divers brought out four of the trapped boys but waited several hours before confirming their safe rescue.

Two more ambulances have been seen leaving the site of a flooded cave in northern Thailand where young members of a soccer team and their 25-year-old coach have been trapped for more than two weeks.

That brings to three the number of ambulances that have left the site Monday during the second day of a high-risk operation to bring the boys out of a labyrinth cave system made up of tight passageways and flooded chambers.

On Sunday, teams of divers brought out four of the trapped boys but waited several hours before confirming their safe rescue.

Authorities have been tightlipped about the progress of Monday’s operation.

Thai authorities are being tight-lipped about who was inside an ambulance seen leaving the site of a flooded cave Monday, as they were the night before when four of the 13 people trapped inside the underground complex were rescued.

On Sunday, officials waited until several hours after the rescued boys had been transported to hospitals to announce their rescue.

As of Monday morning, eight boys and their coach remained in the cave where they have been trapped by floods since June 23.

Thai public television has aired live video of a medivac helicopter landing close to a hospital in the city of Chiang Rai, near the site of the cave where a youth soccer team has been trapped for more than two weeks.

Medics appeared to remove one person on a stretcher but hid the person’s identity behind multiple white umbrellas. An ambulance was seen leaving the scene immediately afterward early Monday evening.

Less than an hour earlier, an ambulance with flashing lights had left the cave complex, hours after the start of the second phase of an operation to rescue the soccer team.

As of Monday morning, nine people remained trapped in the cave, including the 12-member team’s coach, after four boys were rescued on Sunday, the first day of the rescue operation.

An ambulance with flashing lights has left a cave complex in northern Thailand hours after the start of the second phase of an operation to rescue a youth soccer team trapped inside the flooded cave for more than two weeks.

After the ambulance was seen leaving the complex at around 5 p.m. Monday, a helicopter took off. Authorities have said helicopters were ready to take cave evacuees to a hospital. It was unclear who was inside the ambulance or the helicopter.

Chiang Rai acting Gov. Narongsak Osatanakorn, who is heading the rescue, had said the second phase began at 11 a.m. Monday and authorities “hope to hear good news in the next few hours.”

Nine people remained trapped in the cave, including the team’s coach, after four boys were rescued on Sunday, the first day of the rescue operation.

Thai authorities say they have resumed operations to rescue members of a boys’ soccer team trapped in a flooded cave after successfully getting four of the boys out Sunday.

They said the four boys already rescued are hungry but in good health in a hospital.

Officials said at a news conference that the parents of the rescued boys, whose names have not been released, have not yet been allowed to have physical contact with them, pending more extensive examination of their physical condition.

Eight boys are still inside the cave and along with the team coach. The operation to get them out was supposed to resume only after new oxygen tanks could be placed along their route of escape, which is partially underwater.

Australia’s foreign minister says 19 Australian personnel are involved in the Thailand cave rescue operation including a doctor who’s played an essential part in assessing which boys can leave and in what order.

Foreign Minister Julie Bishop told reporters in Australia that anesthetist and experienced cave diver Richard Harris is working with the Thai medical team inside the cave “to make the decisions about the order in which the boys were to be extracted.”

Expert divers Sunday rescued four of 12 boys from a flooded cave in northern Thailand where they were trapped with their soccer coach for more than two weeks. Crews will have to replenish air tanks along the route before rescuing the others.

Thailand’s interior minister says the same divers who took part in Sunday’s rescue of four boys trapped in a flooded cave will also conduct the next operation as they know the cave conditions and what to do.

In comments released by the government, Interior Minister Anupong Paojinda said officials were meeting Monday morning about the next stage of the operation and how to extract the remaining nine people from the cave in the country’s north.

Anupong said divers need to place more air canisters along the underwater route to where the boys and their coach have been trapped since June 23. He said that process can take several hours.

He said the boys rescued Sunday are strong and safe but need to undergo detailed medical checks.

Rescuers at a Thai cave where eight boys and their soccer coach remain trapped have awoken to cloudy skies, after a night in which heavy monsoon rains lashed the mountainous region for several hours.

It was not immediately clear Monday how the overnight rains had impacted water levels inside the flooded cave. Officials have said storms forecast for Chiang Rai province in Thailand’s far north had factored into their decision to go ahead with a complicated and dangerous plan to have the boys and their coach dive out of the cave.

Thailand’s Meteorological Department said there was a 60 percent chance of rain Monday with thunderstorms forecast throughout the week.

Four of the boys were rescued on Sunday, and authorities said the next phase could begin any time within a 10-hour window that began about 7 a.m. Monday.

Elon Musk’s Space X rocket company is testing a “kid-sized submarine” that could be sent to help boys trapped in a flooded Thailand cave.

Musk posted videos on Twitter of the aluminum sub being tested at a swimming pool Sunday midafternoon California time. If the tests are successful, the sub would be placed on a 17-hour flight to Thailand.

Four of the boys were rescued on Sunday, and authorities are now working to replenish air tanks along the cave’s treacherous exit route. They say rescuing the eight remaining boys and their soccer coach could take up to four days.

A spokesman for Musk’s Boring Co. tunneling unit, which has four engineers at the cave, has said Thai officials requested the device, which could potentially help the children through narrow, flooded cave passageways.

Officials say it could take up to four days to complete the rescue of eight boys and their soccer coach from inside a northern Thailand cave.

Expert divers on Sunday managed to get four of the 12 boys to safety. They were quickly transported to a hospital in the town of Chiang Rai, the provincial capital.

The names of the rescued boys were not released.

Rescuers have been navigating a dangerous and complicated plan to get the children out under the threat of heavy rain and rising water underground.

The entire group had been trapped for more than two weeks.