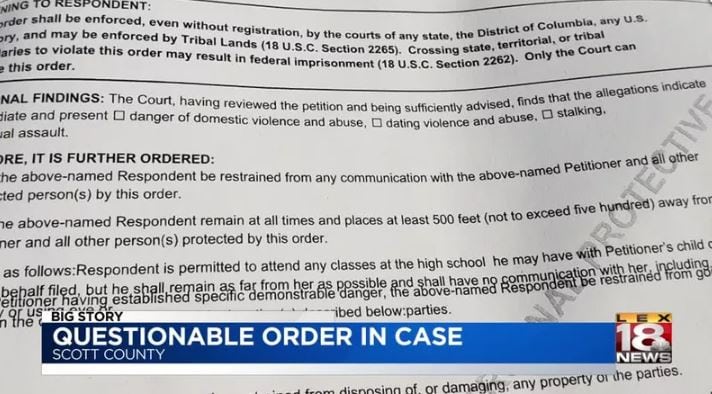 SCOTT COUNTY, Ky. (LEX 18)– People are scratching their heads in Scott County after a protective order was issued in a rape case.

A teen is accused of raping another teen and was ordered to stay away from her, except if they have class together at school.

The order has raised some serious questions, such as what the Scott County trial commissioner was thinking when she issued this order in a rape case.

The 17-year-old male is accused of raping a 16-year-old female, they both attend Scott County High School.

In court documents the 16-year-old’s mother states the 17-year-old caused physical injury to her daughter when he began forcing intercourse with her at the mother’s home. The mom stated her daughter escaped by running upstairs.

Trial commissioner Emily Mayher ordered the accused not to have any contact with the alleged victim.

The order specifically states that respondent remain at all times at least 500 feet away from the victim, yet the rape suspect is permitted to attend any classes at the high school with her.

LEX 18 stopped by Mayher’s office, however she wasn’t in. But over the phone she told us she could not comment on the case.

She did say even though the two may be in the same class, the accused was to have no contact with her.

Serious questions about how a local trial commissioner handled a rape case involving two teens. The accused isn't supposed to be near her, yet they can attend the same class at school. Full story at 12 @LEX18News