Report: No Criminal Charges For Hardin Co. Deputy In Shooting 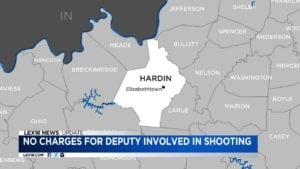 HARDIN COUNTY, Ky. (LEX 18) — A Hardin County deputy who shot a man during a traffic stop will not face criminal charges in the incident.

The News-Enterprise reports here that a grand jury declined to indict Deputy Clennon Smith on charges of assault or wanton endangerment in the Feb. 8 shooting.

Mike Williams was shot at the end of a police chase on a rural road outside of Glendale.

LEX 18 is told there was no evidence of the shooting from Smith or a state trooper who was with him.