LOUISVILLE, Ky. (LEX 18) – A woman was hit in the face and injured while riding a roller coaster at Kentucky 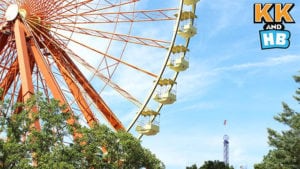 It happened on Saturday night around 8:00 on the T-3 ride.

A spokesperson for Kentucky Kingdom confirmed a woman was hit by an object and suffered a cut on her temple.

She was taken from health services at the park to a hospital by ambulance for further treatment.

The ride was shut down for inspection after the woman was hit.

Ride operators did find loose articles on the ground below the roller coaster such as a cell phone and several other items.

The ride will reopen September first which is the next day the park is open.