KENTON COUNTY, Ky. (WLWT)– A man is in jail after police say he was accused of making threats against schools in Northern Kentucky. 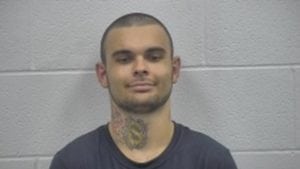 After brief negotiations, 19-year-old Billy Jones Jr. surrendered to police and was arrested at a Florence apartment Monday morning.

According to police, they found a stolen handgun during their search of the place he was staying.

Authorities said the threats Jones is accused of making were not against a specific school, but schools in the area.

He was charged with terroristic threatening and receiving stolen property-firearm.

Jones was taken to the Kenton County Detention Center.