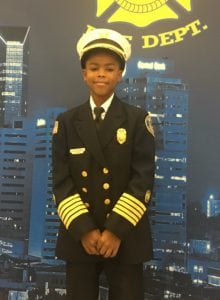 “Lexington firefighters are involved in the community in many ways, and we are excited to share some of those experiences with Brandon in the coming weeks,” said Chief Chilton.

Brandon was presented with an official badge that was pinned to his new Lexington Fire Department uniform.  The Jr. Fire Chief program has been around for decades serving as a fire education and prevention program for kids in Fayette County.  The honorary Junior Fire Chief title is given annually to a Fayette County fifth grade student.

“Being a Junior Fire Chief is wonderful learning experience,” Mayor Jim Gray said. “We congratulate Brandon on being selected to serve. We know his family is as proud of him as his city.”

The Jr. Fire Chief will serve as a fire department dignitary during the month of October, which is Fire Prevention month.  Brandon will be especially busy during the first week of October as he makes appearances on local news shows, tours several businesses and Lexington landmarks, and attends meetings with the Fire Chief, City Council, and the Fallen Firefighters Service in Frankfort.