Banksy Painting Shreds Itself Moments After Being Sold For $1.4 million At London Auction

LONDON (NBC NEWS) –  Art collectors were left stunned on Friday evening when a Banksy painting appeared to self-destruct just moments after it was sold at an auction, in a prank apparently orchestrated by the elusive street artist.

The spray-painted canvas “Girl With Balloon” slid through a shredder embedded in the frame, emerging out the bottom in strips as the final hammer signaled an end to the evening, according to international auction house Sotheby’s. It had sold for $1.4 million, matching a record for the artist first set in 2008.

Banksy posted an image of the scene from the auction house on his Instagram account with the caption “Going, going, gone…”

The photo appears to have been first tweeted by an attendee at the auction who said an alarm sounded just as the frame began to shred the canvas. 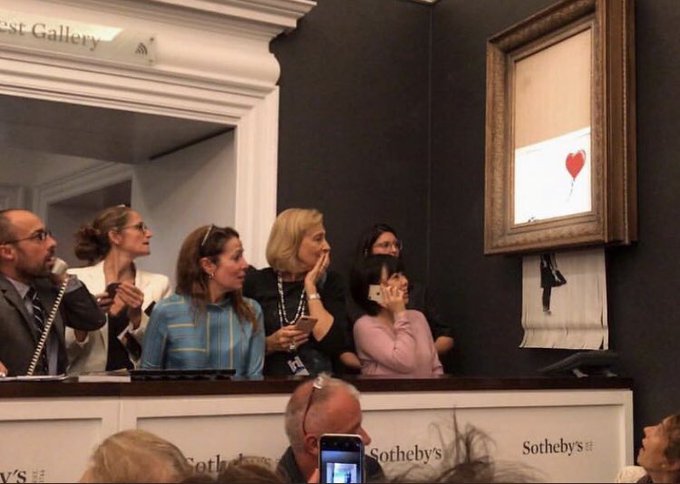 $1,300,000 BANKSY artwork piece just “self-destructed” right after it was sold at Sotheby’s auction!

(An alarm sound went off and the frame began to shred the art piece.)

Banksy, who has never disclosed his full identity, began his career spray-painting buildings in Bristol, England and has become one of the world’s best-known artists.

Known for his controversial work, from criticizing anti-migrant attitudes to the Israel-Palestine conflict, he also has a penchant for elaborate pranks.

“He is arguably the greatest British street artist, and tonight we saw a little piece of Banksy genius,” he said immediately after the incident, according to The Art Newspaper. He added he was “not in on the ruse.”

“Girl With Balloon,” which depicts a small child reaching up toward a heart-shaped red balloon, was originally stenciled on a wall in east London and has been endlessly reproduced, becoming one of Banksy’s best-known images.

It’s unclear what will happen to the famous painting now that it’s been turned to thin strips.

Sotheby’s said it was the first time in auction history that such a thing had happened.

“We have not experienced this situation in the past where a painting spontaneously shredded, upon achieving a record for the artist,” Branczik said. “We are busily figuring out what this means in an auction context.”

The auction house said it was “in discussion about next steps” with the buyer. Some art-market watchers have suggested the work could be worth even more in its shredded state.

Another Banksy painting, Happy Choppers, sold at a Sotheby’s auction in New York on the same day. The unscathed work of art fetched $735,000.