COLLEGE STATION, Texas (AP) – Trayveon Williams flipped into the end zone on a 10-yard run in overtime to give Texas A&M a 20-14 victory over No. 13 Kentucky on Saturday night. 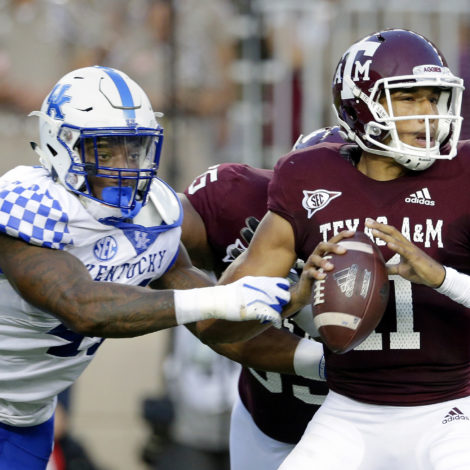 ‘ Miles Butler missed a 43-yard field goal to start overtime, with the ball bouncing back off the crossbar, and the Aggies capitalized with Williams’ touchdown run four plays later.

The Aggies (4-2, 2-1 Southeastern Conference) appeared to be in control and were trying to drain the clock when Mond fumbled, and safety Darius West scooped up the ball and returned it 40 yards for a touchdown to it at 14 with 4:17 remaining.

Texas A&M took a 14-7 lead early in the fourth quarter when Kellen Mond tried throwing underneath to Camron Buckley. The ball glanced off of Buckley’s hands and right into those of tight end Jace Sternberger, who scooted 46 yards up the middle for a go-ahead touchdown.

The Aggies snapped a six-game losing streak to Associated Press Top 25 opponents, including losses this season to top-ranked Alabama and then-No. 2 Clemson.

The Aggies’ defense smothered Benny Snell (13 carries for 60 yards), and was opportunistic in the fourth quarter and overtime.

The Wildcats are sure to drop at least a few spots following the loss, while the Aggies might re-enter the polls following a brief appearance in mid-September at No. 22.