HARLAN, KY. (LEX 18) — Police are seeking help identifying a man after an armed robbery early Sunday morning at a gas station in Harlan. 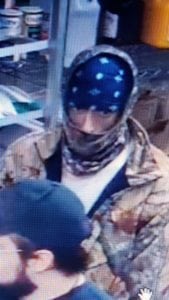 Authorities say am employee emptying trash was confronted by the suspect, who they said stands about 6-foot tall and weighs about 160 pounds.

Police say the man brandished the handgun and demanded money. After the employee gave him cash from the register, the man fled on foot in an unknown direction.

KSP is asking anyone with information on the robbery to call 606-573-3131. Callers may remain anonymous.