On Tuesday, animal control officials along with the Jessamine County Sheriff’s Office responded to a call referencing a dog that had sustained severe cuts to its throat and body near the area of Hartley Drive & Clarence Drive.

When officers arrived, they discovered a 10-year-old white male boxer had been severely injured and needed medical attention. The dog was immediately transported to a local veterinarian where he underwent surgery and is doing well. He will continue to remain under close observation by animal control until he is reunited with his family.

LEX 18 has images of the dog’s injuries but will blur them as they are graphic.

Investigators are searching the area for a white male who was last seen wearing a brown long sleeve shirt, blue jeans, and a knife on his belt. If you have information about the incident or know the whereabouts of the suspect, contact law enforcement immediately at (859) 881-0821. 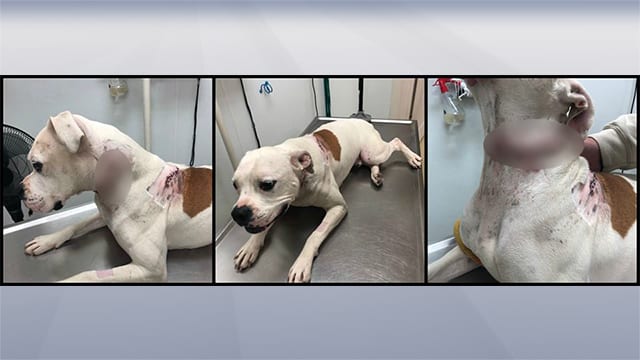