Key Races To Watch On Tuesday 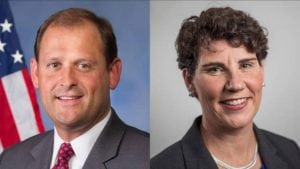 Also on the ballot are independent candidates James Germalic and Rikka L. Wallin, along with Libertarian candidate Frank Harris.

At least 36 current or former educators are running for seats in Kentucky’s state legislature. Most are Democrats, angry at the Republican-controlled legislature for passing laws allowing charter schools and making changes to the pension system. It will be tough for Democrats to win control of either the House or the Senate, where Republicans have large majorities. But they could win back enough seats to frustrate Republican plans heading into the 2019 elections for governor and other statewide constitutional offices.

Rowan County Clerk Kim Davis went to jail in 2015 for refusing to issue marriage licenses after same-sex marriage became legal. Now, she’s facing the voters as she runs for a second term. Davis faces Democrat Elwood Caudill Jr. in a rematch of the 2014 Democratic primary, where Davis won by 23 votes. Davis is now a Republican. Caudill has sought to downplay the marriage license controversy, while promising he will treat everyone equally. Davis has doubled down on her decision , saying she was protecting the state Constitution.

A proposed amendment to Kentucky’s Constitution would guarantee crime victims have the right to be notified and present for most court proceedings. It would also give them “standing” to hire a lawyer and ask a judge to enforce those rights. It’s known as “Marsy’s Law” in memory of a slain California college student. Kentucky is one of six states voting on the amendment. The Kentucky Association of Criminal Defense Attorneys opposes it, saying it will have unintended consequences .

The election is Nov. 6, but the results will be on hold. That’s because a state judge ruled the question on the ballot is unconstitutionally vague. The ruling is being appealed, but a final decision won’t come until after the election. That means the votes will be counted, but state officials will wait to certify the results.

Kentucky Supreme Court Justice Daniel Venters is retiring. Two state judges are running to replace him. Debra Hembree Lambert, currently a Court of Appeals judge, has raised the most money for the nonpartisan race. Dan Ballou, a circuit judge for McCreary and Whitley counties since 2007, has an endorsement from Republican U.S. Sen. Rand Paul. The district covers 27 counties in southern and south-central Kentucky.