Chiefs Set For Oakland Game While Hunt Wonders What’s Next 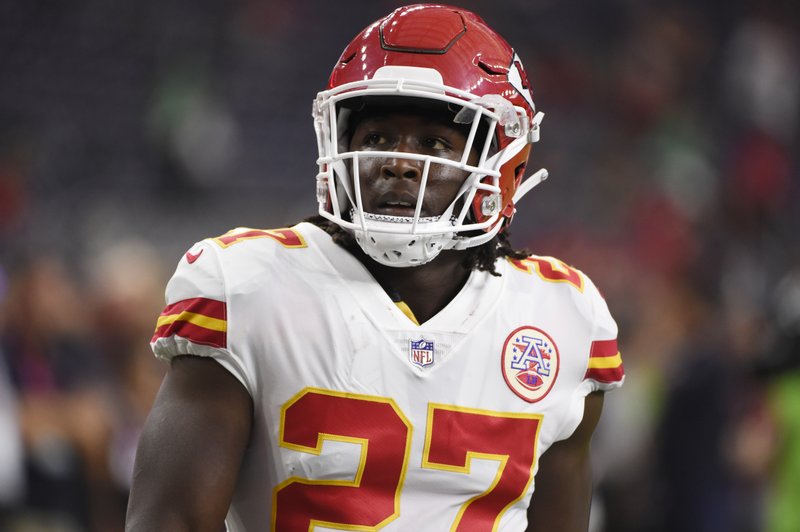 KANSAS CITY, Mo. (AP) – Kareem Hunt went from the Kansas City Chiefs’ practice field to looking for a job in about six hours, a spectacular fall for the NFL’s reigning rushing champion.

The Pro Bowl running back had been preparing for Sunday’s game at Oakland when a months-old video surfaced online. The footage from a Cleveland hotel security camera showed Hunt shoving and kicking a woman, with police ultimately responding. No charges were filed.

The Chiefs immediately sent Hunt home as the TMZ video rippled across social media. An organization that prides itself on providing second chances said in a statement late Friday it had released the 23-year-old star. The team was traveling Saturday.

The NFL had no comment Friday night beyond saying Hunt was on the commissioner’s exempt list, meaning he can’t play or attend games while the league investigates.

The question now for both the Chiefs and Hunt is simple: What’s next?

The Chiefs (9-2) are barreling toward the No. 1 seed in the playoffs, and the loss of their leading rusher is substantial. Hunt already had run for more than 800 yards and had 14 total touchdowns, helping Kansas City form one of the league’s most dynamic offenses.

His ability to churn out yards on the ground helped the Chiefs put away several games. His ability to catch passes out of the backfield had been just as useful.

Yet the falloff to Spencer Ware isn’t that significant.

The Chiefs’ backup was the unquestioned starter heading into last season, even after the team made Hunt their third-round pick. It wasn’t until Ware – whose skill set closely mirrors that of Hunt – went down with a season-ending knee injury in the preseason that the rookie took over.

“There was a question whether he would be able to come back from that injury. It was a pretty tough injury to come back from,” Chiefs coach Andy Reid said recently. “The last couple weeks he has played good football. You can see where he is more confident each week here.”

The Chiefs are also confident in backups Damien Williams and Darrel Williams. And with a soft schedule down the stretch, including two games against the Raiders, there is plenty of time for their offense to adjust to life without Hunt in the backfield.

So that is what’s next for the Chiefs. What happens to Hunt?

The Chiefs and the NFL knew what happened in February in Cleveland, and the organization spoke to Hunt on several occasions before handling discipline internally. But neither the team nor the league had seen the video before it became public Friday.

The NFL made multiple attempts to obtain it, a person familiar with the case told The Associated Press, speaking on condition of anonymity because of the ongoing investigation. The hotel informed the league that corporate policy allowed the video to be given only to law enforcement.

The NFL then contacted Cleveland police, the person said. Police declined to provide the video. Police and hotel officials have not commented.

The video showed Hunt lunging toward a woman and several others in a hotel hallway, and the player being restrained several times before knocking two people down. Two police reports were filed in which each person accuses the other: Hunt is listed as the suspect in one; a woman, Abigail Ottinger, is the suspect in the other.

In its grainy and graphic footage, the video brought a new dimension to developments, showing that what Hunt had told the Chiefs was not the case. The team said he was “not truthful in those discussions.”

The matter brought immediate comparisons to the video of Ravens running back Ray Rice punching a woman in an elevator, which ultimately led to a long legal saga that ended with him never playing in the NFL again.

The big difference between Rice and Hunt, though, is this: Rice was on the downward side of his career while Hunt was on the ascent.

Being on the exempt list does not prevent another team from taking a chance on a player. That was the underlined when the Washington Redskins signed linebacker Reuben Foster, who had been cut last week after he was arrested on suspicion of domestic violence.

The Redskins faced harsh public criticism, and there will no doubt be a similar outcry if a team signs Hunt. But balancing such opposition against the benefits of a young star in his prime is a delicate decision for team executives.

Hunt issued a brief apology late Friday, a small first step toward getting another chance. But as the Chiefs get ready to play in Oakland, Hunt will be watching on television.

There are many more steps before Hunt takes the field again.

If it ever happens.