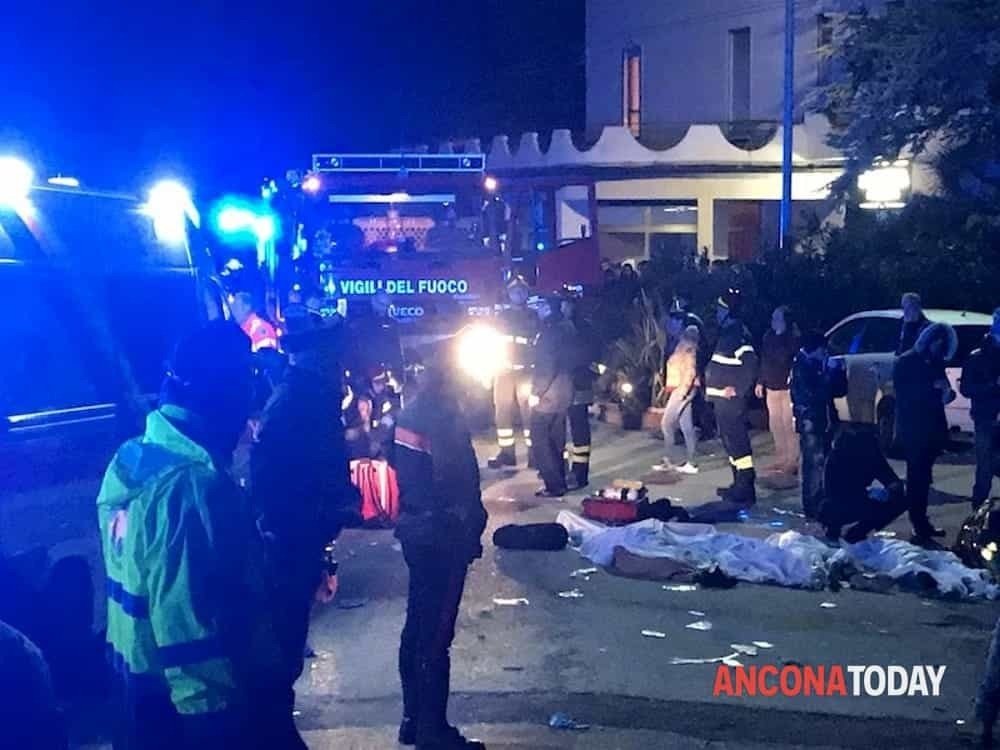 (Francesco Benigni/Ancona Today via the AP)

CORINALDO, Italy (AP) – Teenagers panicked before a rap concert at a jammed Italian disco, setting off a stampede that killed five of them and a mother who had brought her daughter to the event, authorities and survivors said. Fifty-three people were reported injured, including 13 in very serious condition.

Several survivors said panic spread through the late-night crowd after someone unleashed an irritant spray. Investigators said they were checking those reports.

Video on state TV RaiNews24 showed scores of teenagers rushing out a door and surging toward a low wall near an exit at the Blue Lantern disco in the central Italian town of Corinaldo, near Ancona on the Adriatic coast. The barrier then gives way and a cascade of teenagers tumble over it, falling on top of each other.

The bodies of the trampled victims were all found near a low wall, Ancona Firefighters Cmdr. Dino Poggiali told Sky TG24 News. State radio said most of the dead had their skulls crushed in the melee.

The victims – three girls and two boys – ranged in age from 14 to 16 and the mother who was killed was 39, said Col. Cristian Carrozza, commander of the Ancona province Carabinieri paramilitary police.

“Close down the place, convict someone. Who’s going to give me back my son?” Giuseppe Orlandi, fighting back tears, told reporters after he had identified the body of his son, Mattia, 15, in a hospital morgue.

The stampede occurred shortly after 1 a.m., less than 30 minutes before the concert by Italian rapper Sfera Ebbasta was to begin.

Authorities said organizers had sold far too many tickets for the space. Ancona Chief Prosecutor Monica Garulli told reporters that about 1,400 tickets were sold but the disco was only able to hold about 870 people.

Later, Premier Giuseppe Conte, who visited the scene, said the disco had three rooms but inexplicably only used one for the concert, and it only holds 469 people.

While prosecutors investigate “the government must ask itself what to so that such tragedies must never happen again,” Conte said.

The woman who was killed, Eleanora Girolimini, had four children and had accompanied her 11-year-old daughter to the concert, her husband, Paolo, told reporters. The girl was treated for a knee injury.

Outside the hospital where the bodies were brought, he lashed out at the event’s organizers, saying that many at the event were drunk.

“Four children now are without their mother, and one of them is still nursing,” he said. “It was way overcrowded and alcohol abounded.”

An 18-year-old survivor, who left the hospital in a wheelchair due to a leg injury, was asked by RAINew24 about the spray. She replied that whatever it was, it left her and others unable to breathe, and people started to panic and flee.

Doctors at Ancona’s main hospital said the most critically injured from the concert, all between 14 and 20 years old, suffered cranial and chest traumas, while others had arm or leg injuries.

Sfera Ebbasta wrote on Twitter that he was “deeply pained” by the tragedy, thanked rescuers and offered his “affection and support” to the families of the dead and the injured. Out of respect to them, he cancelled some promotional appearances.

The rapper added he wanted everyone to “to stop and think how dangerous and stupid it is to use pepper spray in a discotheque.”

Italian high schools, which are usually open on Saturdays, were closed this weekend for the Dec. 8 national holiday, which made it more likely for teenagers to attend such a late concert.

Fire commander Poggiali said it was too early in the investigation to know if any safety violations at the site might have played a role in the tragedy. He said when rescue workers arrived, all the doors to the disco were open.

Interior Minister Matteo Salvini vowed that responsibility would be determined for “six broken lives – whoever out of nastiness, stupidity or greed transformed an evening of partying into tragedy.”

“Citizens have the right to safety wherever they are, in workplaces as well as places of entertainment,” Mattarella said.

At the Vatican, Pope Francis bowed his head in silent prayer after he told 30,000 pilgrims and tourists in St. Peter’s Square that he was praying “for the young people and the mamma” as well as for the many injured at the concert.