(CNN) – Cyntoia Brown, who’s serving life in prison for killing a man who bought her for sex when she was 16, could still be freed soon.

The Tennessee Supreme Court last week ruled Brown would have to serve at least 51 years in prison for the 2004 killing before she’s eligible for release.

But amid widespread outrage on social media, Gov. Bill Haslam’s office is now reviewing her case, which has drawn support from A-listers like Rihanna and Kim Kardashian West.

The Republican governor said he hopes to make a decision before he leaves office next month. 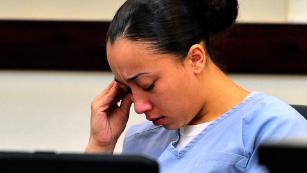 “We are in the midst of reviewing Cyntoia’s case,” Haslam said at an event Monday night, responding to a local Black Lives Matter activist who asked about clemency for Brown.

“We’ll hopefully have a decision — I’m just here for six more weeks, so it’ll be before that,” Haslam said, according to a video of the event posted online by The Tennessean newspaper. “But we’re doing our best to review every aspect of that, talking to everybody involved, just like we are with several other — I wouldn’t say exactly similar cases — but somewhat similar cases.”

Brown has said she was raped and forced into prostitution by a pimp after a difficult childhood marked by abuse and drugs.

In 2004, 43-year-old Johnny Mitchell Allen solicited her for sex and took the 16-year-old back to his house, where she saw a gun cabinet.

Brown said she resisted his advances until he reached under the bed, and she feared he was going to hurt her. That’s when she took a gun out of her purse and shot Allen, killing him.

Though only a teenager, Brown was tried as an adult and sentenced to life in prison. Prosecutors argued the killing wasn’t motivated by self-defense, but robbery because Brown took Allen’s wallet after shooting him.

Decision rests with the governor

Haslam’s office is reviewing “a lot” of clemency cases, the term-limited governor said Monday. And Haslam indicated he wouldn’t treat Brown’s case differently simply because it had gotten a lot of media attention.

Last week’s ruling by the state Supreme Court won’t affect Haslam’s decision, he said. The unanimous ruling came in response to a lawsuit pending with the US Sixth Circuit Court of Appeals, which asked the Tennessee Supreme Court to weigh in.

Some in the audience weren’t satisfied by the governor’s response.

“That’s not good enough,” one woman yelled before call-and-response chants of, “No justice, no peace,” broke out among activists.

In Tennessee, clemency decisions rest solely with the governor, though the state’s Board of Parole can make recommendations.

That also could help Brown.

The parole board in May split three ways on the question of clemency for her: Two members supported it, two opposed it and two favored making Brown eligible for parole after serving 25 years.