5 Heartwarming Moments In Politics, Even In 2018

Washington (CNN) – 2018 has been a tumultuous year in Washington — we’ve seen unprecedented turnover in the White House, the passings of two political statesmen, and indictments of several Trump associates as part of special counsel Robert Mueller’s investigation (which still continues full speed ahead).

The holidays, however, are a time to be hopeful. As the second year of the Trump administration comes to a close, here are five moments from this year’s political news that everyone can find something to smile about, no matter your political leaning. 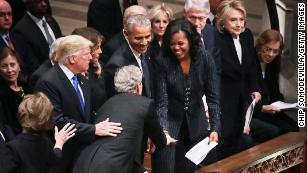 Since President Barack Obama took office, protocol has placed these two next to each other during official events. Former first lady Michelle Obama and former President George W. Bush have been spotted hugging, joining hands and just seeming to enjoy one another’s company over the years, but their friendship went on full display earlier this year at the late Sen. John McCain’s funeral. The two shared a sweet moment (and social media virality) when Bush handed Obama a cough drop in their row of former presidents and first ladies. At his own father’s funeral later in the year, Bush repeated the gesture, handing Obama another small item from his pocket when he greeted her.
Situating the headquarters of this regional newspaper in a hub that skilfully combines education, business, creativity and innovation helps it compete.
In an interview in November, Obama said that her friendship with 43 “reminds us that we can get there with the right leadership and with the right tone setting and with each of us giving one another the benefit of the doubt.”

“I’d love if we as a country could get back to the place where we didn’t demonize people who disagreed with us,” she added. 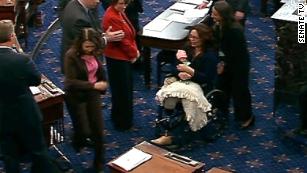 In April, Illinois Sen. Tammy Duckworth gave birth to a baby girl, making her the first US senator ever to give birth while in office.

Democratic Sen. Amy Klobuchar and Republican Sen. Roy Blunt worked together to change the longstanding rules to members to bring babies onto the Senate floor. Duckworth’s daughter, Maile Pearl, joined her for votes on the Senate floor, to applause — and cooing — from her mother’s colleagues.

“It feels great,” Duckworth told reporters. “It is about time, huh?” 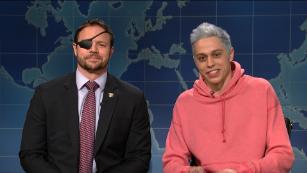 After “Saturday Night Live” comedian Pete Davidson mocked incoming Republican Rep. Dan Crenshaw’s eyepatch — a result of an injury he suffered while serving as a Navy SEAL in Afghanistan — the two ultimately reconciled on the late-night comedy show.

Davidson offered an apology and said Crenshaw was a “war hero.”

“I mean this from the bottom of my heart. It was a poor choice of words. The man is a war hero, and he deserves all the respect in the world,” Davidson said. “And if any good came of this, maybe it was that for one day, the left and the right finally came together to agree on something.”

Crenshaw accepted the apology and also paid tribute to Davidson’s father, a firefighter who was killed on 9/11.

Weeks later, after Davidson shared a troubling Instagram post indicating he may have been feeling suicidal, Crenshaw reached out.

“I told him everyone had a purpose in this world,” Crenshaw said. “God put you here for a reason. It’s your job to find that purpose. And you should live that way.”

4. New pups on the block 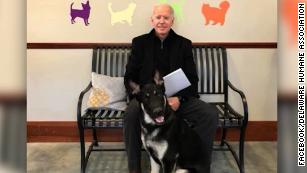 Former Vice President Joe Biden and Sen. Elizabeth Warren may both throw their hats in the ring for 2020 — but what’s an adventure without a best friend?

Biden adopted Major, a German shepherd, in November from the Delaware Humane Association after fostering him. Biden has another German shepherd named Champ whom he picked up from a breeder in 2008. That same year, Biden was promised a post-election dog by his wife Jill, who would tape pictures of dogs to the seat in front of him on the campaign plane.

On Elizabeth Warren’s 38th wedding anniversary, her husband Bruce brought home a golden retriever named Bailey. Her previous golden retriever, Otis, died of cancer five days before she was elected to the Senate in 2012.

“A few weeks ago, Bruce said, ‘We’re getting a dog,'” the senator wrote on Instagram. “And now we have Bailey who chews, piddles, and makes my heart happy.”

Bailey has been featured cleaning off plates in the dishwasher, rooting for the Red Sox and dressing up for Halloween on Warren’s Instagram.

And in June, the late former President George H.W. Bush enlisted the help of a new family member in his final months — a yellow Labrador service dog named Sully. Sully was trained by the Guide Dog Foundation and America’s VetDogs, a nonprofit that provides service dogs at no cost to veterans, active-duty service members and first responders with disabilities. Sully even got his own Instagram account.

Sully was set to go back into service to help other veterans at Walter Reed National Military Medical Center, according to a post on Instagram by former President George W. Bush.

Voters turned out in record numbers this year, with an estimated 118 million people turning out to cast their ballots in the 2018 midterms.

In the last midterm elections in 2014, just 36.7% of the eligible voting population cast ballots. In 2018, the number jumped to an estimated 50.1% turnout of the voting eligible population.

“With Trump likely to be on the ballot in 2020, don’t be surprised if that election also features high turnout,” CNN’s Harry Enten wrote about the high turnout. “Like for 2018, it’s not clear who high turnout might benefit in 2020. It’s really a matter of who turns out.”