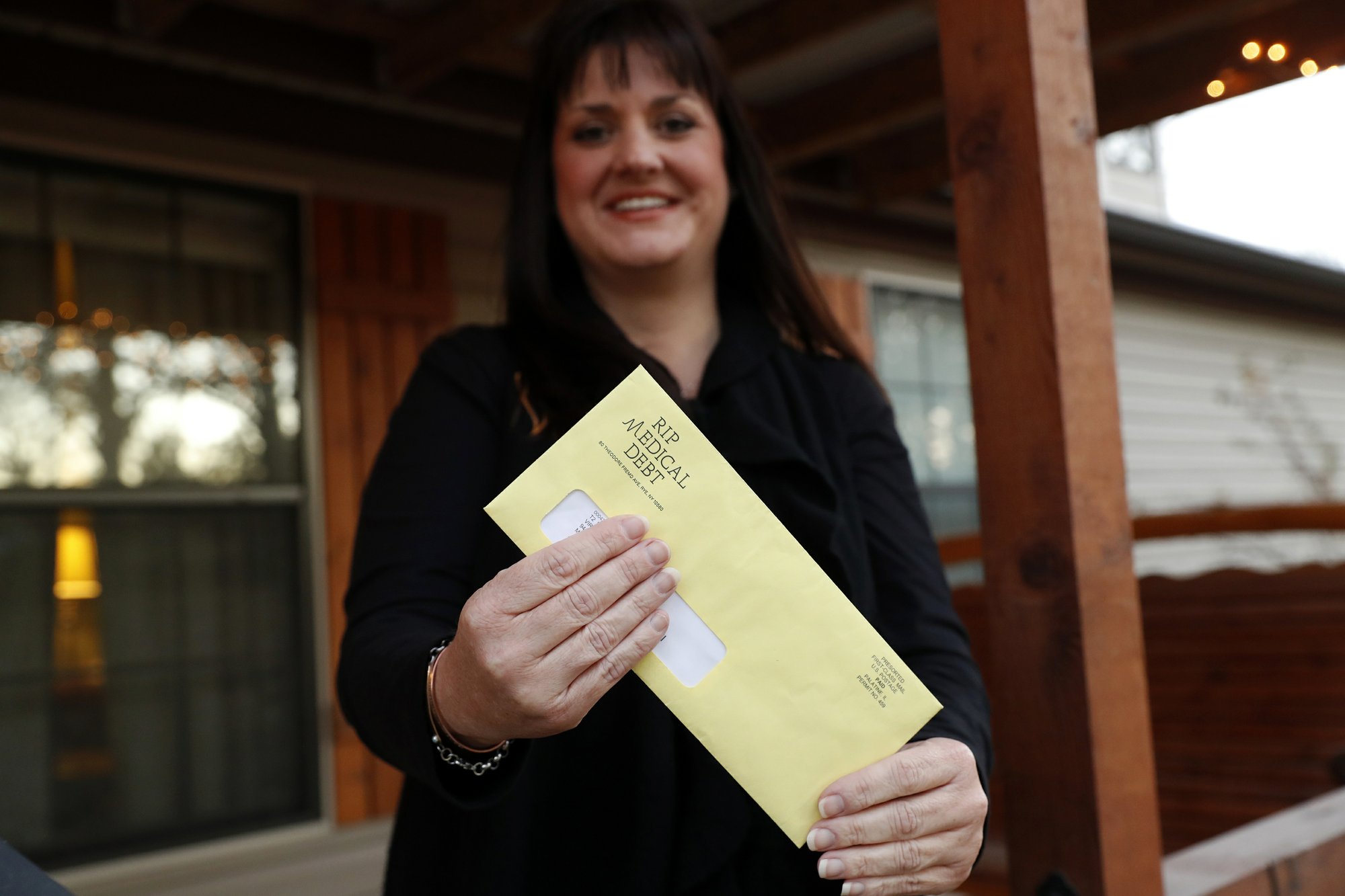 ALBANY, N.Y. (AP) – Philip Sasser had a familiar, sinking feeling when he saw the yellow envelope in his mailbox. He figured it was another past-due medical bill, but it turned out to be quite the opposite.

“I opened it up and it said these bills had been paid off,” said Sasser, of Milton, Florida. “I didn’t understand. It was out of the blue.”

Sasser is among the lucky recipients of a letter from RIP Medical Debt, a Rye, New York-based nonprofit that uses money from donors to eliminate crushing medical debt that threatens the financial well-being of hundreds of thousands of American families. The charity says it has erased $475 million in debt for more than 250,000 people since it was founded four years ago.

Antico and RIP co-founder Jerry Ashton spent decades as executives in the debt resolution business. Now they do the same thing debt collectors do – buy portfolios of past-due bills for pennies on the dollar. But instead of hounding people for payment, they send letters announcing their debt is now zero. Forgiven debts have ranged from $100 to over $250,000, Antico said.

“You get a lot of bang for your charity buck,” said Judith Jones of Ithaca, New York. She and Carolyn Kenyon, members of a group advocating universal health coverage, raised $12,500 that RIP Medical Debt used to purchase a portfolio of $1.5 million in debts owed by 1,284 people.

More than 43 million Americans have about $75 billion in past-due medical debt on their credit reports, according to Antico, Ashton and co-author Robert Goff’s book, “End Medical Debt.” They estimate a total of $1 trillion in reported and unreported unpaid medical debt, and say debt forgiveness is their best interim solution until a better financial structure is worked out for the U.S. health care system.

“We’re not the solution,” Ashton said. “We’re just dealing with the symptoms.”

Now they’re trying to raise $50,000 for RIP to buy $50 million in medical debts owed by veterans.

For Sasser, 45, the debt relieved was $1,200 not covered by his high-deductible insurance for his wife’s debilitating medical condition she’s been grappling with for six years. Sasser had to cut way back on his advertising and graphic design business to care for her and their two teenage boys.

“To have these large bills looming and no way to pay was a source of constant stress,” Sasser said. “When I opened that letter, it lifted a huge weight off.”

Reagen Adair, a fifth-grade teacher in Murchison, Texas, had $3,100 in debt erased by RIP. She was inspired to pay it forward by making a donation to the charity to help others struggling with medical bills.

“The system is broken,” Adair said. “We have a problem with our health care system. What we have now is not working.”

RIP Medical Debt has its origins in Occupy Wall Street. Ashton’s office overlooked the park where social activists camped out in 2011 to protest income inequality and seek solutions.

When people associated with the Occupy movement launched a project to buy debt and erase it, Ashton and Antico offered their expertise. They turned that project into RIP Medical Debt in 2014.

It limped along until 2016, when HBO’s “Last Week Tonight with John Oliver” did a segment where they gave the nonprofit $60,000 to purchase $15 million in medical debt and wipe it out.

In addition to individual donations, fundraising campaigns for RIP have been held across the country by health care groups, television stations and other organizations.

In November, an anonymous couple donated $2 million to RIP to eliminate $250 million in medical debt.

Because the nonprofit’s model revolves around buying portfolios of bulk debt from hospitals or investors, it is unable, at this point, to abolish bills for specific individuals.

“When we get these emails from people begging us for help, it would melt the heart of a stone statue,” Ashton said. RIP’s website has a registry where people can sign up in case the charity one day is able to help individual people. Ashton said there are more than 10,000 names.

“My goal in life is to be able to help people who come to us,” Antico said.

This story has been corrected to show the proper first name spelling of Reagen Adair, not Reagan Adair.