GoFundMe To Refund The $20 Million Raised For The Border Wall

(CNN) – A crowdfunding effort for a wall at the southern border reached an impressive number, but it may have to give all that money back. 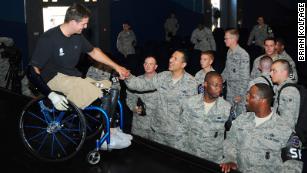 If all 63 million Americans who voted for President Trump donated, each would only have to pay $80 to reach the goal.

As of Friday, the campaign raised just over $20 million, but it’s not all that Kolfage hoped for.

The campaign, GoFundMe said, was designed to be all or nothing.

“That did not happen. This means all donors will receive a refund,” GoFundMe told CNN.

With the now longest government shutdown in US history taking place over the funding of the border wall, Kolfage’s campaign page said he “was tired of watching the U.S. government’s inability to secure our southern border.”

Kolfage said that he has determined that the federal government is not in a place to accept the money, so he intends on having a team to build a wall privately.

In place of the GoFundMe campaign, Kolfage set up a 501(c)(4) non-profit Florida Corporation named “We Build the Wall, Inc.” and is asking donors to redirect their contributions to the organization.

But he will honor the refund, he said on the campaign page, if donors choose not to move to the new platform.

“When I created this fundraiser, I said if we did not reach our goal we will refund donors. I am honoring that commitment today. We will promptly refund your donation unless you tell us you approve our new plan for action,” Kolfage said.