TEMPE, Az. (CNN) – A 14-year-old boy holding a replica gun was shot and killed Tuesday by a police officer as he ran down an alley in Tempe, Arizona, authorities said.

The Tempe Police Department on Friday released body-camera footage of the incident involving the teen, identified as Antonio Arce by the city’s mayor.

The officer, identified by Tempe police as Joseph Jaen, was responding to a call from a citizen who reported a suspicious vehicle. In the alley, he approached a parked gray Chevy pickup that was apparently involved in a burglary, Tempe Police Chief Sylvia Moir said during a news conference. 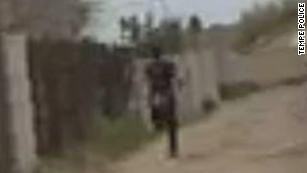 Video from the body camera worn by the officer shows the 14-year-old running away before he was shot.
The video shows the officer taking cover behind a trash can while the teen exits the truck. The officer is heard calling for the teen to put his hands up as the boy runs away.

“He’s got a handgun,” Jaen is heard saying on the footage.

The video shows the teen run almost to the end of the alley, then the officer fires two shots.

One of the shots struck the teen in the shoulder blade and the other hit a wall at the end of the alley, Moir said. Authorities did not give a cause of death.

Hours after Tuesday’s shooting — and days before the video was released — a Tempe police spokesman told CNN affiliate KNXV that the teen turned and faced the officer.

“The suspect turned toward the officer, at which time the officer perceived a threat and fired his service weapon,” Sgt. Ron Elcock said.

A police statement Wednesday states, “During the case, the officer perceived a threat and fired his service weapon, striking the suspect.” It adds that officers performed CPR at the scene and “immediately called for paramedics.”

However, the body-camera video only shows the teen running away from the officer and does not appear to show him turn.

The gun held by the boy was a replica 1911 airsoft gun that the teen had just stolen from the truck, Moir said, adding he had other stolen items on him.

‘A question that needs to be asked’

The boy’s relatives are in shock, an attorney for his family told CNN affiliate KPHO.

“We’re in the process of trying to figure out what happened. The video is but one piece,” Danny Ortega said.

The distance between the officer and the boy when he was shot seems to be significant, Ortega said, noting that the family went to the police station and asked to see the footage.

“It was a long distance,” the attorney said. “How this young man could have presented a threat at that far a distance is a question that needs to be asked.” 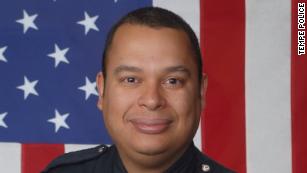 Jaen, a 14-year veteran of the Tempe police force, has been placed on administrative leave pending criminal and administrative investigations. He was in the National Guard from 2007 to 2013, serving in Iraq in 2011, Moir said.

The police department is focused on being “open, honest and empathetic” and urges “everyone to withhold judgment until criminal and administrative investigations are concluded,” Moir said.

Tempe Mayor Mark Mitchell said he joins the family in mourning their son.

“All young people have the promise to lead lives of meaning and contribute to a greater good,” Mitchell said. “When that potential is interrupted for any reason, it amounts to a tragedy that cannot be overstated.”

The mayor also extended sympathy for the officers of the Tempe Police Department, which he said has focused on building community trust with more training. Mitchell said he hopes to continue developing “understanding, cooperation and trust,” as well as thoughtful discourse and conduct while the investigation is underway.

“With the release of the body-camera footage and the officer’s name this afternoon, there will be increased scrutiny on this investigation,” he said. “That scrutiny is understandable and warranted. I would ask individuals to be patient as we learn the facts.”

CNN’s Kelly McCleary and Chris Boyette contributed to this report.