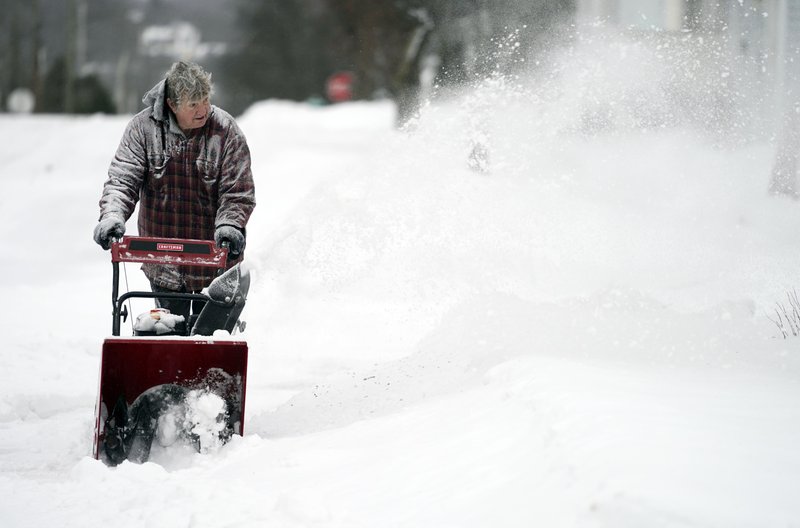 BOSTON (AP) – A major winter storm brought some of the coldest temperatures of the season and blanketed a wide swath of the country in snow as it wreaked havoc on air travel and caused dangerously icy conditions throughout New England Sunday.

The National Weather Service issued winter storm warnings or advisories for part or all of at least 15 states stretching from southeast Missouri to the northern tip of Maine ahead of the weekend storm.

More than 1,500 flights were canceled nationwide Sunday, with Boston’s Logan Airport among the hardest hit, according to FlightAware, a flight tracking company.

Xavi Ortega, a 32-year old engineer from Spain, slept overnight at the airport with his wife after their 10:30 p.m. flight to Barcelona Saturday was canceled. He said the couple won’t be able to get onto another flight until Sunday night.

Mountain regions saw significantly more, with the Adirondacks in upstate New York registering up to 20 inches while western Massachusetts’ Berkshires saw as much as 10 and parts of northern New England were on track to see up to two feet of snow.

Nicholas Nicolet and his 6-year-old son Rocco welcomed the fresh powder as they cross-country skied on the sidewalks of Montpelier, Vermont early Sunday morning during the storm.

Meteorologists warned the primary concern heading into Monday is plunging temperatures that will be some of the coldest felt so far this season.

Wind chills were expected to hit in the teens in the New York City area, 25 below in Albany and down to 40 below in the Adirondacks.

“It’s life-threatening,” said Ray O’Keefe, a meteorologist with the National Weather Service in Albany. “These are dangerous conditions that we’re going to be in and they’re prolonged, right through tomorrow.”

As ice accumulated on trees and power lines Sunday, utilities in Connecticut reported more than 20,000 customers without power.

“We had more freezing rain and sleet than we expected,” said Hartford Mayor Luke Bronin as crews across the state raced to clear and treat major roadways to prevent dangerous black ice conditions.

Amtrak canceled trains across the Midwest and Northeast over the weekend, but said full service would resume Monday.

It caused travel problems as it dumped up to 10 inches of snow on parts of the Midwest Saturday.

In Chicago, a plane skidded from a slick runway at O’Hare International Airport. No injuries were reported. In Kansas, a snowplow driver was killed when his vehicle rolled over. And in southeastern Missouri, slippery conditions caused a 15-vehicle crash on Interstate 55.

President Donald Trump urged Americans affected by the winter storm to “be careful” in a tweet early Sunday. But, as he’s done in the past, Trump conflated the short-term weather phenomenon with longer-term climate change.

The White House’s own National Climate Assessment recently rejected the idea that a particular plunge in temperatures can cast uncertainty on whether Earth is warming.

“Amazing how big this system is,” Trump tweeted. “Wouldn’t be bad to have a little of that good old fashioned Global Warming right now!”