LEXINGTON, Ky. (LEX 18) – A jury Wednesday found a Lexington police sergeant not guilty of official misconduct in case in which he was accused of using department resources to keep tabs on a woman.

Sgt. Jervis Middleton embraced his attorney, Scott Crosbie, as the verdict was read. 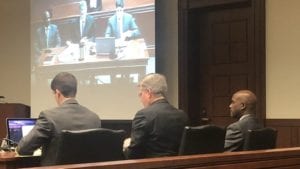 The jury deliberated for a little less than two hours following testimony from multiple witnesses, including fellow police officers.

Sgt. Jervis Middleton was accused of using police resources to keep tabs on a woman with whom he previously had had a relationship. Middleton was charged Aug. 14, 2018, with second-degree official misconduct for allegedly using law enforcement resources to obtain information about the victim.

On Wednesday, Sgt. Gary Thurman, and officers James McCollough, Jonathon Floyd, and Rebecca Saylor all said testified that Middleton requested they run license plates on vehicles at the woman’s home.

The defense called retired former Assistant Chief James Jackson Jr. to the stand. He said there are all kinds of reasons police might check a house or run a license plate number.

In addition, the defense pointed out that an emergency protective order against Middleton was dropped due to insufficient evidence.

On Tuesday, the woman who filed the order that she met Middleton at a local gym. She testified that Middleton would show up in random places when she hadn’t told him where she was going.