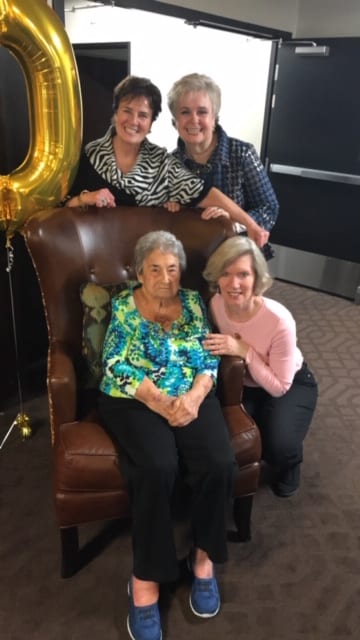 Allison has long been a big Kentucky Wildcats fan.

And although the Cats didn’t pull off a road win against Tennessee on her birthday, she’s celebrating with some special new keepsakes.

Allison celebrated the big 100 at her assisted living center in Lexington with friends and family.

And the big surprises?  She was gifted an autographed photo of head men’s basketball coach John Calipari and a team picture of the 2018-2019 Wildcats, which was also autographed by each player.

Coach Calipari sent a letter to Allison as well, wishing her a happy birthday on behalf of the team, coaches and staff.

Ms. Allison isn’t just any fan though, as Coach Calipari noted in his letter he remembered the time she delivered a prayer blanket to him at the basketball offices years ago, when his mother was diagnosed with cancer.

Allison was an avid crocheter and took part in a ministry through Mary Queen of the Holy Rosary Catholic Church in which parishioners make and deliver blankets and prayer books to people in difficult times.