FRANKFORT, Ky. (LEX 18) -The two bills most concerning to state educators will likely not be heard from again in this session.

HB 205 would have given tax breaks to those who donated to private school scholarships. Public educators were concerned that the money would take away from funding for public schools. The bill never made it out of committee.

“I’m taking a very cautious approach from the judiciary standpoint. That we need 60 votes since it’s a non-budget session, and that’s gonna be problematic at this time. So 205 is probably something we’re gonna have to address next session,” said Carney.

House Bill 525  was a true line in the sand for the Kentucky Education Association. 525 was set to change the general administration and management of the Teachers’ Retirement System Board of Trustees and its responsibility for “proper operation.” 525 was on the House orders to be discussed but it will not come up.

“Again, I think you know it’s something we would look to do, but I think moving forward we want to make sure there’s more fiduciary experience on that board and on that group. So I think there’s still a lot of work to be done there,” said Carney.

Teachers were still in the Capitol Rotunda chanting. Bevin made his opinion on the situation known by hanging a sign outside his door, calling out teachers for not sicking out during former Governor Beshear’s time in office when he says his office has donated more to the teachers’ pension fund. 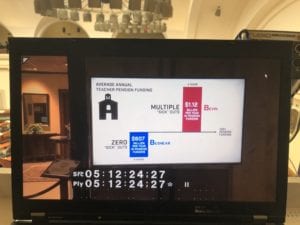 The House has come to order. Here we go @LEX18News pic.twitter.com/NVBzX1BcEM