(CNN) – The pilots on board Ethiopian Airlines Flight 302 battled the plane’s automated flight control systems for almost the entire duration of the six-minute flight, according to a preliminary report into the crash obtained by CNN on Thursday.

The captain and the first officer struggled as the Boeing 737 Max 8’s systems, designed to prevent the plane stalling, repeatedly forced the nose of the plane down. For nearly six minutes, the report shows, the pilots worked through a series of procedures to try to regain control of the plane.

The problems on board the Ethiopian Airlines jet mirror those encountered on the doomed Lion Air Flight 610 — which operated the same 737 Max 8 model and crashed in October — in what could be a significant blow to Boeing as it struggles to get the aircraft back in service.

Boeing CEO Dennis Muilenburg on Thursday afternoon said the company was “sorry for the lives lost” in the 737 Max crashes.

“These tragedies continue to weigh heavily on our hearts and minds, and we extend our sympathies to the loved ones of the passengers and crew on board Lion Air Flight 610 and Ethiopian Airlines Flight 302,” he said in a statement.

The Ethiopian Airlines captain had called out “pull up” three times to tell the first officer to raise the nose, according to the preliminary crash report. Both pilots tried to pull the nose up together to keep the plane flying, but they were unable to regain control. In total, the anti-stall system pushed the nose down four times during the flight.

In the end, after the pilots had turned back to Addis Ababa, the automated system pitched the plane into a steep dive from which it was impossible to recover, and it crashed into the ground. All 157 people on board were killed.

The report on the Ethiopian Airlines crash does not specifically name the Max 8’s plane’s anti-stall system — called the Maneuvering Characteristics Augmentation System (MCAS) — which is suspected to have contributed to the Lion Air disaster.

But its findings make it likely that the MCAS system pushed the plane into a dive fueled by erroneous angle of attack sensor readings.

The MCAS system automatically lowers the nose of the plane when it receives information from its external angle of attack sensors that the aircraft is flying too slowly or steeply, and at risk of stalling. 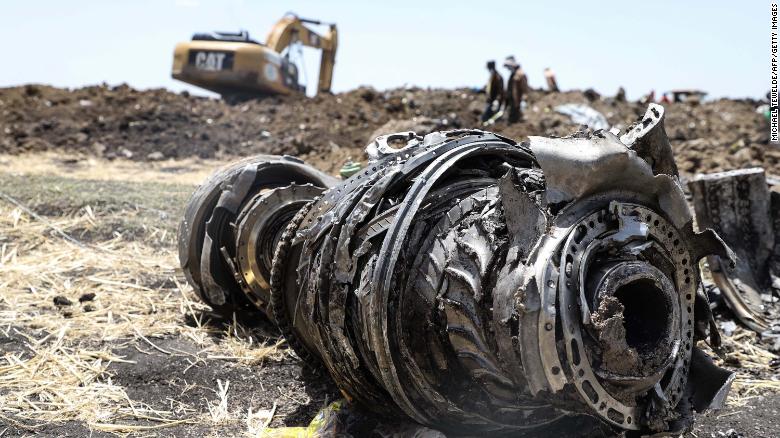 Boeing is working on a change to the system’s software. The company recognized the similarities between the two crashes and acknowledged the role of the MCAS system in an earlier statement on Thursday. “The preliminary report contains flight data recorder information indicating the airplane had an erroneous angle of attack sensor input that activated the MCAS function during the flight, as it had during the Lion Air 610 flight,” the statement said.

“To ensure unintended MCAS activation will not occur again, Boeing has developed and is planning to release a software update to MCAS and an associated comprehensive pilot training and supplementary education program for the 737 Max.”

In his apology on Thursday afternoon, Muilenburg said, “The history of our industry shows most accidents are caused by a chain of events. This again is the case here, and we know we can break one of those chain links in these two accidents.”

Muilenburg acknowledged the “devastation of the families and friends of the loved ones who perished.” He said “erroneous activation of the MCAS function can add to what is already a high workload environment” for pilots.

“It’s our responsibility to eliminate this risk,” he said. “We own it and we know how to do it.”

Speaking before the release of the report, Ethiopian Minister of Transport Dagmawit Moges suggested that Boeing review “the aircraft flight control system related to the flight controllability.”

She told reporters in Addis Ababa that her agency would recommend that aviation authorities verify that Boeing has “adequately addressed” flight control issues “before release of the aircraft to operations.”

The preliminary report, which has not yet been publicly released, does not specify a cause for the crash. A final report could take as long as a year to produce.

​The timeline of the flight, detailed in the preliminary report, reveals that the pilots’ struggle to control the plane began moments after the plane took off from Addis Ababa Bole International Airport, en route to Nairobi. 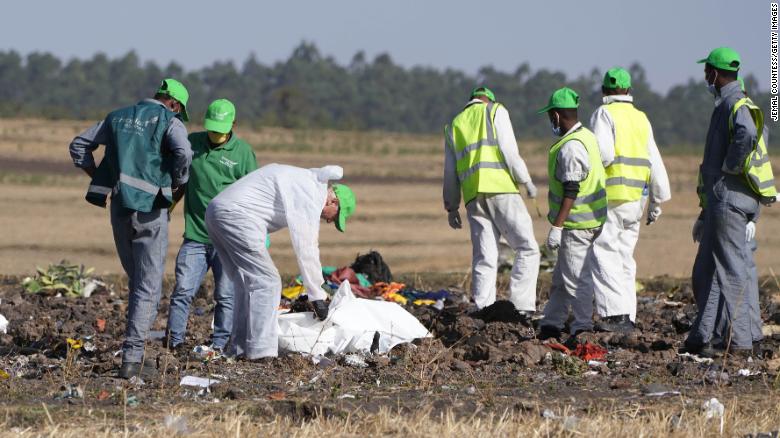 Investigators collect personal effects and other materials from the crash site of Ethiopian Airlines Flight 302.

Recognizing a problem with the automatic trim, the pilots followed emergency procedures and turned off the system. Instead, the pilots tried to use the backup manual trim wheel to adjust the trim, but the airplane was traveling too fast and the manual trim wheel would have been physically impossible to operate, according to a 737 pilot who spoke with CNN.

In the final minute of the flight, the pilot told his first officer that they had to pull up together. Thirty-two seconds before the crash, both pilots tried to trim the nose up, and for a brief moment, the aircraft’s stabilizer, controlled by the trim, made the corresponding change.

But five seconds later, the aircraft’s automated systems once again trimmed the nose down, pitching the nose down even further, steepening the dive. The plane was angled 40 degrees nose down, hurtling towards the ground at 575 miles per hour as it crashed.

Ethiopian Airlines CEO Tewolde Gebremariam has told CNN that it was too early to say whether the remedial actions being taken by Boeing would be sufficient. He added that the preliminary report proved “all the speculators with false allegations” wrong, referring to criticism and doubts over the pilot’s qualifications. The airline had “always been confident” of its pilots, he said.

Representatives of US pilots gave a cautious welcome to the report. “The initial findings of the Ethiopian investigation confirm for us that an MCAS malfunction is a serious emergency and not a benign event,” said Captain Jason Goldberg, a spokesman for the American Pilots Association. “We remain cautious and hopeful that the potential fix will be thoroughly vetted and not hurried or fast tracked. The APA will remain actively engaged to ensure that the 737 Max will fly again only when all stakeholders are satisfied the aircraft is ready.”​