CLAY COUNTY, Ky. (LEX 18) — Police in Clay County were seeking information after two of three vehicles stolen in a burglary were discovered abandoned. 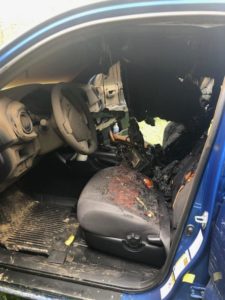 Authorities said deputies responded April 15 to a burglary at a home along South Kentucky Highway 421 and found that in addition to items taken from the home, three vehicles also were missing: a black 1996 Geo Tracker, a silver 2009 Toyota Tacoma and a blue 2017 Toyota Tacoma.

Police say they found the 2009 Tacoma the following day, abandoned on a four-wheeler trail.

On April 19, officials found the 2017 Tacoma burned out along another trailer.

Authorities are still looking for the Geo Tracker.