Cheek, Henson and Martens All Homer in Home Finale Win 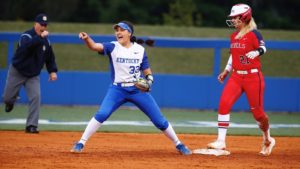 LEXINGTON, Ky. –  The No. 22 Kentucky softball team ran its winning streak to four games on Wednesday night, as they run-ruled Eastern Kentucky 10-2 in five innings to conclude the home season at John Cropp Stadium.

Eastern Kentucky jumped on the board first in the first two batters of the game, as a single to the left side and a home run by Destinee Lizzmore put the Colonels up, 2-0 in the top of the first. Those were the only two hits that the EKU offense could muster against Autumn Humes, who earned her 11th win of the season in the circle.

The momentum began to pick up for Kentucky when senior Katie Reed scored a run in the bottom of the first inning on an RBI single by junior Alex Martens.

In the bottom of the second inning, senior Kelsee Henson tied the game with a home run of her own and third of the season. Junior Alex Martens came up to bat with the bases loaded and hit her third grand slam of the year bringing the score up to 7-2.

After a double by Reed putting senior Jenny Schaper on third base, senior infielder Abbey Cheek hit her 17th homer of the year in the bottom of the fourth inning, which scored three seniors on their last home game at John Cropp Stadium. This pushed Kentucky’s run total to 10, and helped pave the way for UK’s 12 run-rule win of the season.

Junior right-handed pitcher Autumn Humes secured the win improving her record to 11-8. This win improved Kentucky’s record for the season to 30-18 and a conference record of 12-9. The 30-win season is Kentucky’s 11th 30-win season under head coach Rachel Lawson.

Kentucky will close out its Southeastern Conference season schedule with a three-game series against No. 3 Alabama commencing on Friday night at 7:30 p.m. ET in Tuscaloosa, Alabama. The game will be shown live on the SEC Network+.

The Wildcats have now won 30 games for the 11th time under head coach Rachel Lawson. This is also the fourth win in a row for the Wildats.

Alex Martens’ grand slam in the bottom of the second inning was the key play. This was her second grand slam of the season and scored Abbey Cheek, Katie Reed and Jenny Schaper. Martens had five RBI in the game on Wednesday and was 2-for-3 at the plate.

Abbey Cheek was the key player, as she went 1-for-2 at the plate with a three-run home run. Wednesday was also a big day for Cheek, as she was named a finalist for USA Softball National Player of the Year.

Eastern Kentucky began the game on a strong note with two runs at the top of the first. EKU 2, UK 0

Alex Martens singled to left field at the bottom of the first causing Katie Reed to score. EKU 2, UK 1

Kelsee Henson homered to right field in the bottom of the second to lead off the inning. Jenny Schaper reached on a fielding error by the shortstop allowing Lauren Johnson to score. Alex Martens then homered to center with the bases loaded allowing her, Abbey Cheek, Reed and pinch-runner Kennedy Cowden to score. UK 7, EKU 2

Finishing off the night on offense, Cheek hit a homer to right center allowing Reed and Schaper to score. The home run was her team-leading 17th of the season. FINAL – #22 Kentucky 10, Eastern Kentucky 2