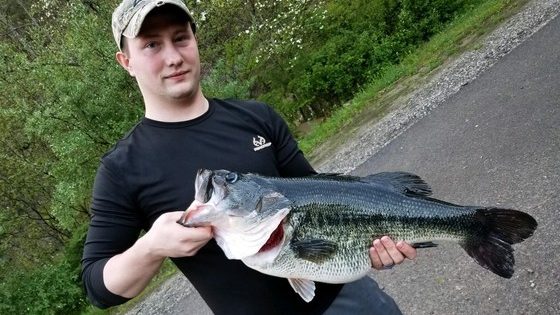 FRANKFORT, Ky. (LEX 18) — An Evarts man has broken the state record for the largest largemouth bass, hooking into and landing a 14-pound, 9.5-ounce behemoth at Highsplint Lake in Harlan County.

Ward said he was targeting a smaller — but still weighty by most measures — fish at the time.

“I pitched a lizard in there, and the 4-pounder showed interest,” Ward said in a statement. “Then, another came in and looked like a big log. The 4-pound fish triggered her (the record-breaker) to pick it up. I set the hook, and it was on. Good Friday turned into a great Friday for me.”

“When I saw it in person, what first caught my eye were the eyes on that fish were huge,” Kevin Frey, Eastern Fisheries District coordinator for the Kentucky Department of Fish and Wildlife Resources, said in a statemet. “It would look like a shark if you saw it swimming in the water. The thickness of the fish was really impressive.”

The record largemouth measured 26.8-inches long with a girth of 22.5 inches.

The previous record-holder was a 13-pound, 10-ounce largemouth caught by Dale Wilson of London from Wood Creek Lake in Laurel County in 1984.