(TODAY) – “Jeopardy!” host Alex Trebek is finding the inspiration to beat his stage 4 pancreatic cancer diagnosis by meeting with other survivors.

Trebek, 78, gave an emotional speech on Saturday at the Pancreatic Cancer Action Network’s PurpleStride walk in Los Angeles, where he invited all of the survivors participating in the fundraising walk to join him onstage.

“As you all know, survivorship is measured starting by the date you are diagnosed with cancer. And on that scale, my gosh, I’m a 62-day survivor,” Trebek said to cheers. “I promise you this, if I become a 22-year survivor, you will all be welcome at my 100th birthday.”

The beloved host revealed his diagnosis in a video message on March 6. In an update last month, Trebek assured fans he’s feeling well enough to continue hosting the popular game show as he undergoes treatment. 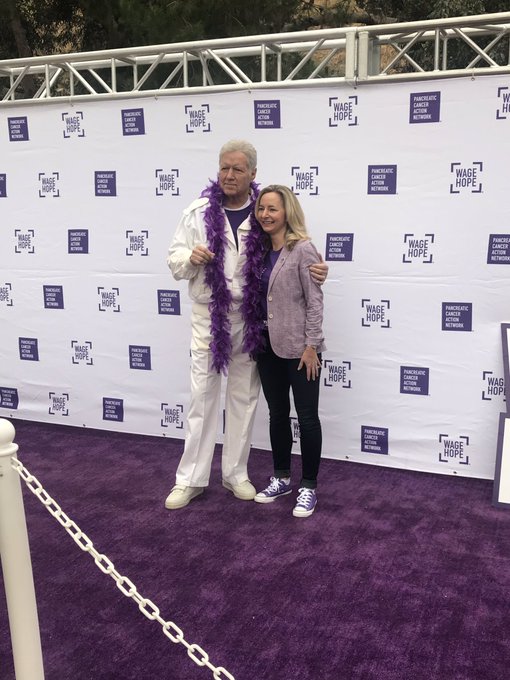 I’m thrilled that Alex Trebek was able to join us this morning at @PanCANLA’s #PurpleStride. The strength and positivity he demonstrates in the face of #pancreaticcancer is inspiring to us all. We continue to #WageHope in honor of survivors like you, Alex.

Trebek had support at the event from nearly 200 staff members from “Jeopardy!” and “Wheel of Fortune,” who participated in the walk as members of “Team Alex.”

Sarah Whitcomb Foss, a member of the “Jeopardy!” crew, shared a photo of Trebek smiling with her two young daughters. The team was clad in purple, the color of pancreatic cancer awareness.

Harry Friedman, executive producer of “Jeopardy!” said the group hoped to raise $35,000 for pancreatic research in honor of the 35 seasons of “Jeopardy!” They ended up raising more than $60,000 for “Team Alex,” which is accepting donations from the public.

“When Alex made his announcement about his diagnosis, his immediate reaction was: ‘I’m going to beat it, I’m going to be a survivor and we will get it done.'” Friedman said. “That has been his mantra and our motto and we wear it proudly every day.”