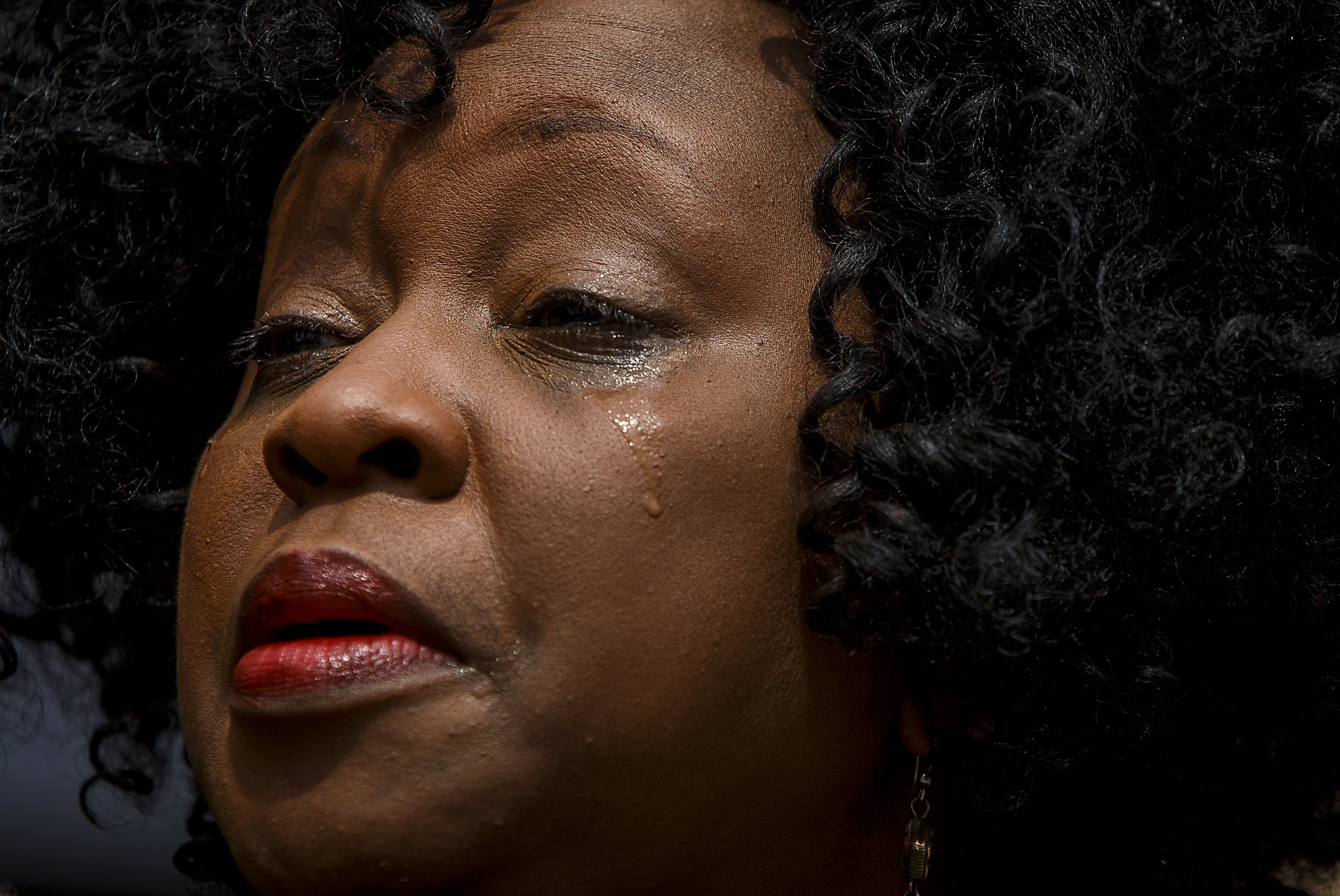 VIRGINIA BEACH, Va. (AP) – The Latest on the shooting in Virginia Beach (all times local):

A grieving community has come together to pray, following a mass shooting that killed 12 people in a Virginia Beach municipal building.

The prayer service Saturday evening included a slow and solemn reading of each victim’s name and a moment of silence.

About 100 people attended the service at Bridge Church in Virginia Beach. Lead pastor Archie Callahan urged members of the crowd to lean on each other and help the victims and their families.

He said: “When part of our city hurts, we all hurt.”

Virginia Lt. Gov. Justin Fairfax attended the service and said the victims were “wonderful people who didn’t deserve what happened to them.”

An official with the federal Bureau of Alcohol Tobacco Firearms and Explosives says investigators have identified two .45 caliber pistols used in the shooting at a Virginia Beach municipal building that killed 12.

Speaking at a news conference Saturday afternoon, ATF regional special agent Ashan Benedict says all indications are that the guns were bought legally. He says one gun was bought in 2016 and the other was bought last year.

Benedict says two other weapons were found at the gunman’s home.

The gunman was identified as DeWayne Craddock. Eleven city employees and one contractor were killed in the Friday afternoon shooting at a municipal building. Craddock was killed in the ensuing gunbattle with police.

President Donald Trump has ordered U.S. flags to be flown at half-staff in memory of the victims of a shooting in Virginia.

Trump said in a statement released by the White House on Saturday that he was ordering the action as a “mark of solemn respect for the victims of the terrible act of violence” on Friday.

Craddock worked for the city as an engineer, and authorities say 11 of his 12 victims were also city employees.

Four other people were hurt, including three who remain hospitalized in critical condition.

Dr. Martin O’Grady told a news conference Saturday that one patient had just gotten out of surgery and another patient faced repeated operations for wounds inflicted when a gunman opened fire at a municipal building in Virginia Beach.

O’Grady is head of the hospital trauma unit. He said two of the patients being treated at the hospital had sustained “significant” injuries but were expected to survive. He described a third patient’s injuries as “devastating.” He would not elaborate due to health care privacy laws.

Authorities said earlier that a fourth patient was receiving treatment at a hospital in Norfolk.

The four people were injured when, according to police, 40-year-old DeWayne Craddock opened fire at a city municipal building on Friday afternoon, killing 12 people and injuring four. Police responded to the scene within minutes and killed Craddock after a prolonged shootout.

The officials the guns haven’t been connected to any other shootings in a federal database. The officials weren’t authorized to discuss an ongoing investigation publicly and spoke to the AP on the condition of anonymity.

The gunman was identified Saturday as DeWayne Craddock. Eleven city employees and one contractor were killed in the Friday afternoon shooting. Craddock was killed in the ensuing gunbattle with police.

The prime suspect in the deadly shooting in Virginia was described by a co-worker as a “nice guy” who was quiet and polite and who showed no signs of the violence that was to come.

Police say 40-year-old DeWayne Craddock was killed Friday after he rampaged through a Virginia Beach municipal building and killed 12 people. Craddock had worked for the city of Virginia Beach for 15 years as an engineer.

Joseph Scott is an engineering technician for the city and knew Craddock. Scott had bumped into Craddock in the men’s restroom of the building just minutes before the shooting, and Scott says he was in complete disbelief after learning later that Craddock was being blamed for the bloodshed.

At a vigil held Saturday morning, Scott says he prayed not only for the victims but also for Craddock.

Scott said of Craddock: “He was not evil. He was just another guy who had problems.”

Virginia Gov. Ralph Northam has visited the hospital where people wounded in the Virginia Beach shooting that killed 12 are being treated.

Speaking to CNN on Saturday, Northam said he talked to family members of the wounded and one of the patients. He also said he thanked the doctors and hospital staff who are helping them.

Northam said such tragedies “are becoming all too familiar.”

The gunman was identified as DeWayne Craddock. Eleven city employees and one contractor were killed in the Friday afternoon shooting at a municipal building. Craddock was killed in the ensuing gunbattle with police.

Northam also said he spoke with President Trump on Friday night and he offered the full support of the federal government.

About 200 people have come out in Virginia Beach to pray for 12 people killed in a mass shooting at a municipal office building.

Many people openly sobbed or dabbed their eyes with tissues. Gov. Ralph Northam also attended the vigil led by a local church. Northam told the crowd: “We grieve with you” and “we are all in this together.”

In a tweet Saturday morning, Trump says he offered condolences to the community and that the federal government is there for whatever is needed.

The gunman was identified as DeWayne Craddock, who had worked for the city as an engineer for 15 years.

Eleven city employees and one contractor were killed in the shooting. Craddock was killed in the ensuing gunbattle with police. One police officer was hurt but was expected to recover.

Virginia Gov. Ralph Northam called for prayers at a Saturday vigil for the victims of a shooting at a Virginia Beach municipal building that killed 12 people.

Northam said to pray, not just for the victims, but also for first responders to Friday’s violence because they too are grieving.

The gunman was identified as DeWayne Craddock, who had worked for the city as an engineer for 15 years.

Eleven city employees and one contractor were killed in the shooting. Craddock was killed in the ensuing gunbattle with police. One police officer was hurt but was expected to recover.

Authorities in Virginia would not say whether the man believed to have opened fire on co-workers at a city municipal building was facing any sort of disciplinary action related to his employment.

Virginia Beach City Manager Dave Hansen said at a press conference Saturday that DeWayne Craddock had been employed by the city for 15 years as an engineer.

Hansen said Craddock was still employed at the time of the shooting Friday afternoon and possessed a security pass that allowed him access to nonpublic areas of the municipal building.

Neither Hansen nor Virginia Beach Police Chief James Cervera would comment on whether Craddock was facing disciplinary or termination proceedings at the time of the shooting.

Some 11 city employees and one contractor were killed in the shooting. Craddock was killed in the ensuing gunbattle with police. One police officer was hurt but was expected to recover.

Police say they have recovered “additional weapons” that were in the possession of the suspect believed to have shot and killed 12 people during a rampage at a municipal building in Virginia.

Virginia Beach Police Chief James Cervera said at a news conference Saturday that the weapons were recovered at the scene as well as at the home of the suspect, identified as DeWayne Craddock.

Earlier, Cervera had said that the suspect used a .45-caliber handgun with a suppressor in the killings. Unlike some states, silencers are legal in Virginia, though it is illegal to have one in Virginia Beach per local ordinance.

Authorities say Craddock stormed the building and opened fire Friday afternoon at the city building before he was killed in a gunbattle with police.

Officials have identified the gunman who killed 12 people and then was shot by officers at a Virginia Beach municipal building as Dewayne Craddock.

Authorities used a Saturday morning news conference to focus on the victims. They projected photos on a screen and gave each victim’s name along with biographical details.

City manager Dave Hansen says 11 of the 12 victims were employees of the city. He says families of the victims have been notified. He says he’d worked with most of them for many years, and they “leave a void that we will never be able to fill.”

Officials identified Craddock for the first time after talking about the victims. They say they will name Craddock only once, then will not refer to him again.

Authorities say a longtime city employee wielding a .45-caliber handgun with a suppressor fatally shot 12 people on three floors of a municipal building in Virginia Beach before police shot him.

Four other people were wounded in Friday’s shooting, including a police officer whose bulletproof vest saved his life.

Police Chief James Cervera says the suspect engaged in a “long gunbattle” with law enforcement officers. He says officers gave the suspect first aid after he was shot, but he died.

Cervera said Friday that he would release the suspect’s name after authorities had contacted his family, but would mention the name only once.

He said after that, “he will be forever referred to as the suspect because our focus now is the dignity and respect to the victims in this case and to their families.”