The Hamilton County Heroin Coalition issued a health alert after the alarming spike in overdoses. The alert is intended to warn hospitals in the Greater Cincinnati region, so they can adequately prepare for a surge in overdose patients.

According to HCHC, this also means there has been a surge in overdose deaths.

Exact numbers of fatalities from the weekend haven’t been calculated yet, but HCHC said they believe it will be in the double digits. 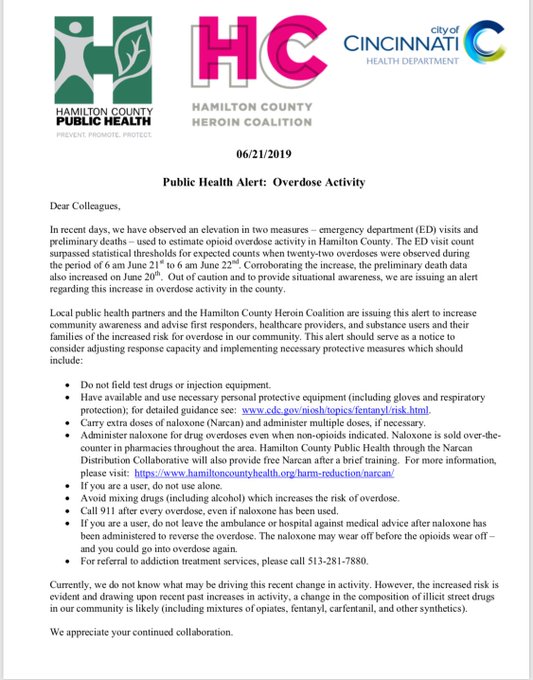 Be warned, Heroin is deadly. We have already responded to nearly 20 overdose incidents since midnight.

“I’ve got to be honest, I’m frustrated and I struggle with this like many others,” said Tom Synan, Chief of the Newtown Police Department and a member of the Heroin Coalition.

Synan said the weekend’s spike in overdoses is the worst he’s seen in years.

In a heartfelt message to the community on his Facebook page , Synan said a member of his own community could be counted among the overdoses during this spike.

Saturday evening, as the overdose numbers continued to climb, IKRON, a company focused on addiction services celebrated its 50th anniversary at Memorial Hall.

The company offers a variety of addiction and mental health services, and members of the organization said the recent spike shows how serious and complicated the issue of addiction can be.

“It certainly is concerning,” said Janie O’Brien, clinical director at IKRON. “It’s concerning to me as a person and as a professional. It makes my work that much more important and meaningful. My work and the work of all the other people at IKRON.

Synan says another detail complicating the battle against overdoses has been the introduction of fentanyl. Synan believes it could be the reason behind the high number of overdoses in just one day.

“It adds an extra challenge to the coalition and what we’re trying to do,” he said. “It’s been very difficult and trust me, it’s frustrating for us. We all struggle with trying to find answers.”

The coalition warns that fentanyl has recently been discovered in drugs besides heroin; around half of the weekend’s overdoses involved cocaine.