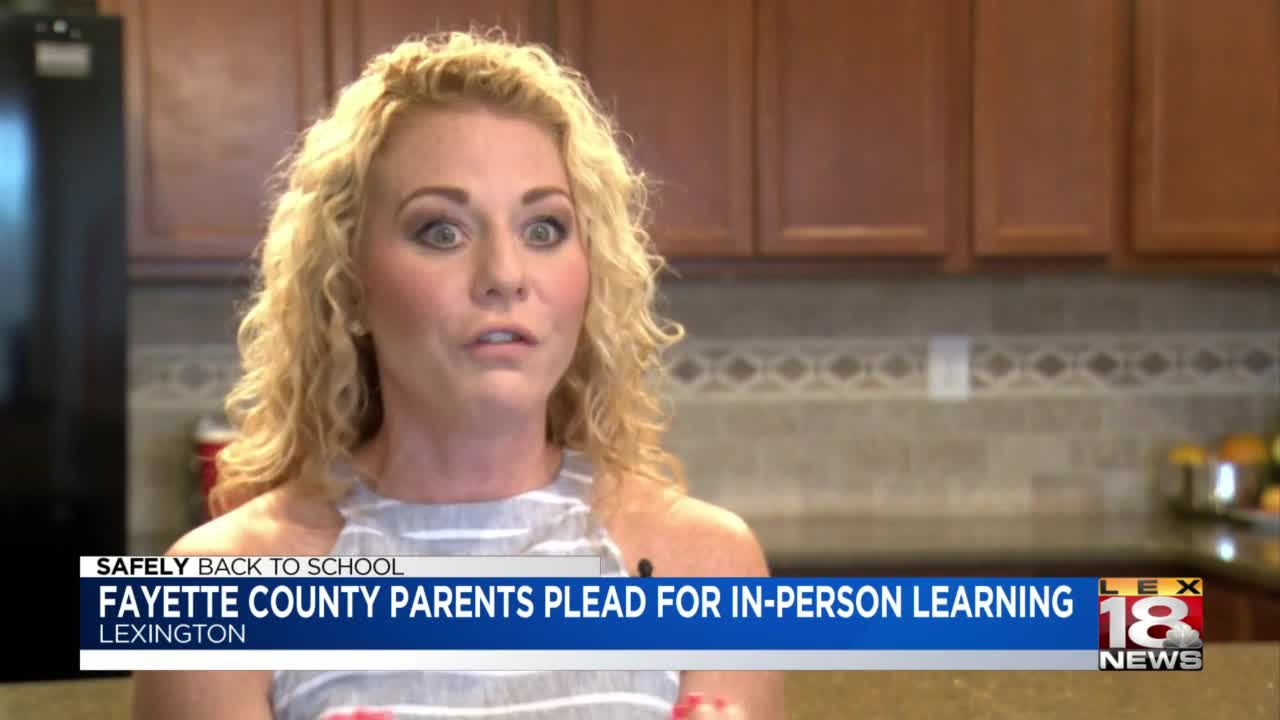 LEXINGTON, Ky. (LEX 18) — Fayette County Public Schools began their fourth week of school at home virtually Monday morning amid an outcry from hundreds of student's parents pleading for the district to consider an in-person school option.

FCPS started the 2020-21 school year virtually on Aug. 26. The district said that decision was made after Gov. Andy Beshear recommended on Aug. 10 Kentucky schools wait to begin in-person classes until at least Sept. 28; pending a decline in positive COVID-19 cases.

The district also said their decision to start virtually was made due to staffing concerns from employees who may contract the virus or who were not willing to go back into the classroom due to health concerns.

Nathan Hoskins is a single dad to five children who attend FCPS, ages Kindergarten through 7th grade. He said he disagrees with the district's reasoning.

"If the guy working at Kroger can restock your Chex snack mix and has to go to work, you can go to work and go to school and children can go to school," he said. "There's a safe way to do it. I'm not asking for anybody to do anything, unsafe. I'm not asking anybody to put their life in jeopardy. There are populations of our community that need to be at home and stay at home and stay isolated. And then there are those that don't."

Hoskins joins more than 100 parents who plan to protest Monday at 6 p.m. outside the FCPS board meeting on Main Street in Lexington.

He said they are protesting after sending hundreds of emails, phone calls and other forms of messages to the district and school board that have mostly been unanswered. LEX 18 reached out to the district to find out what the best way is for parents and students to make their opinion known, however, they did not respond.

"I want everyone to understand, we're not reckless parents. We believe in safety we believe in doing things appropriately," said Kristin Childress, a mother of two FCPS students. "And at the right time but the right time has passed us the right time to do it was the beginning of the school year, along with other areas in Fayette County and across Kentucky. But, we understand that there is no replacing the classroom and teachers do too."

Childress said considering the current circumstances of online learning, she has been very impressed with how teachers at her sons' FCPS elementary school have handled the first few weeks.

"We kind of dubbed it, the term 'Mission Impossible,' because it is truly an impossible feat at this point for these teachers to accomplish," she said.

Childress explained her sons are some of the lucky students as they have Chromebooks and a strong internet connection, but hundreds of students in the district are either missing a Chromebook, an internet hotspot, or both.

"On our worst day of NTI 2DL in my home, which I can tell you is filled with tears, stress and anxiety, it doesn't hold a candle to the stories that are coming out left and right of how families have been affected by this decision all over Fayette County," said Childress.

Further confusion from hundreds of FCPS parents stems from receiving a survey from the district in July asking their preference for sending their children back in-person or not. As the district announced at a board meeting before school started, 69 percent to 72 percent of parents responded saying they were "likely" or "very likely" to send their students back in person.

Dozens of parents who reached out to LEX 18 said they understand in-person learning is not best for every family, but said they want the choice to send their children back as they are worried for their kid's long-term education, mental health and socializing skills.

"I just worry all the time. I mean it doesn't stop. I have severe anxiety because of this," Childress said.

Childress plainly stated what she hopes the district will take away from the Monday night protest:

"We have a right to a choice on our children's education, it is not a one-way street. And if we are going to be ignored through emails, Facebook messages, TV interviews, we will line up on the streets of Lexington, and shout from the rooftops, 'We deserve a choice, we have a right to a choice. And it is time that all students and all families are considered.' Given the state of Fayette County in the private schools, and of course, the public schools that are listening to their stakeholders and making the choice to get kids back in the classroom; We deserve that right too."