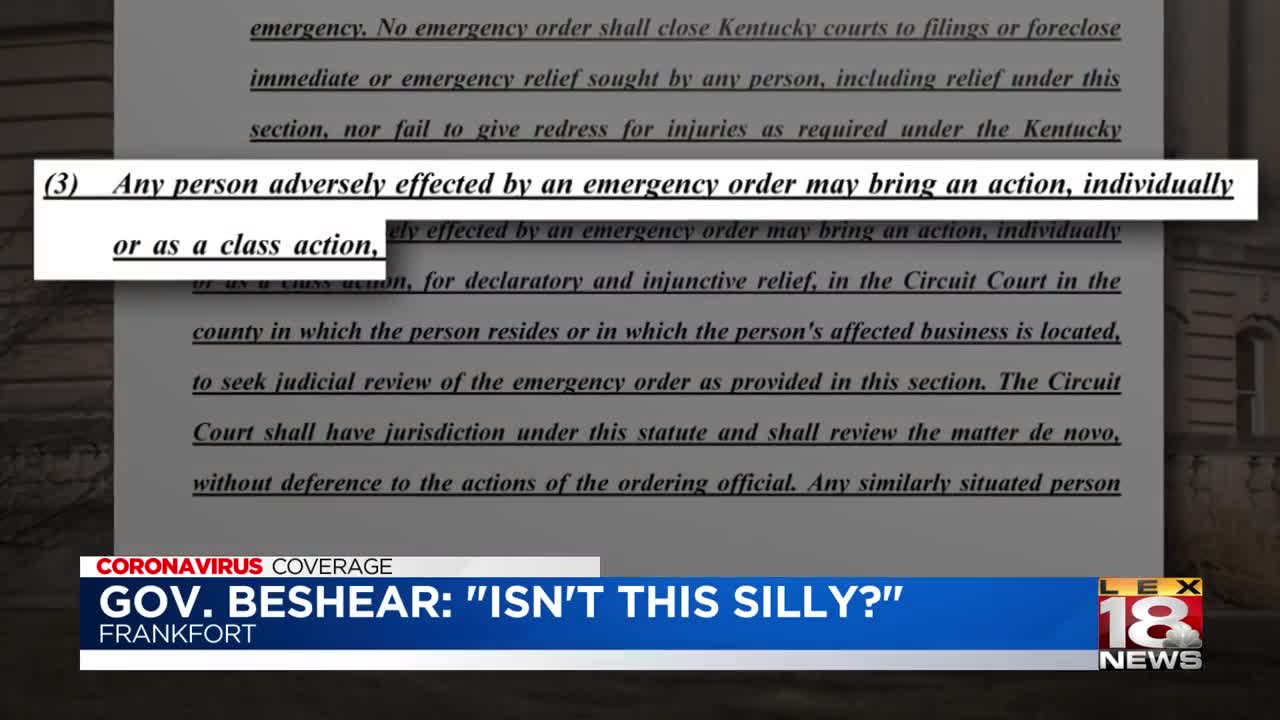 FRANKFORT, Ky. (LEX 18) — Gov. Andy Beshear called a bill that would allow people to sue Kentucky over the emergency steps he has taken to fight the coronavirus "silly."

Beshear addressed the bill after he was asked a question about it during his coronavirus update on Sunday.

"I'm trying to save people's lives and if somebody doesn't understand that or someone doesn't care, I don't really have a reaction for them," said Beshear.

The bill being discussed is House Bill 322, but it's an amendment to the bill that calls for the changes in question. It would limit the extent of a governor's executive orders during a public health emergency. It would also allow Kentuckians to sue the state if the order hurt their business.

"People can put an amendment and let the whole world sue me," said Beshear. "I used to be a lawyer, I can handle that. But I'm going to continue to do the right thing."

Beshear has repeatedly said he would rather be criticized for doing too much to protect people from the coronavirus than doing too little.

"If after this, people want to look back and say we were overly aggressive, that's a reality I look forward to because it means our people were safer than what we anticipate is coming," said Beshear.

However, the lawmaker behind the bill, Rep. Savannah Maddox, defended her amendment. She believes measures meant to protect people's health from the coronavirus should not harm them in other ways.

"We should all be willing to abide by the precautions and recommendations set forth by the CDC and other public health officials related to COVID-19. However, we must also bear in mind that we cannot allow the consequences of our preventive measures to surpass the goal of recovery that we all share," said Maddox. "We, individually and as a Commonwealth, have an obligation to look out for others and to approach this crisis in a way that mitigates the risk of spreading communicable disease, but also doesn't result in unnecessary economic hardship and dire unintended consequences."

Due to where the bill currently is in the legislative process, it's unlikely the bill will go anywhere this session.