Dakotas lead US in virus growth as both reject mask rules 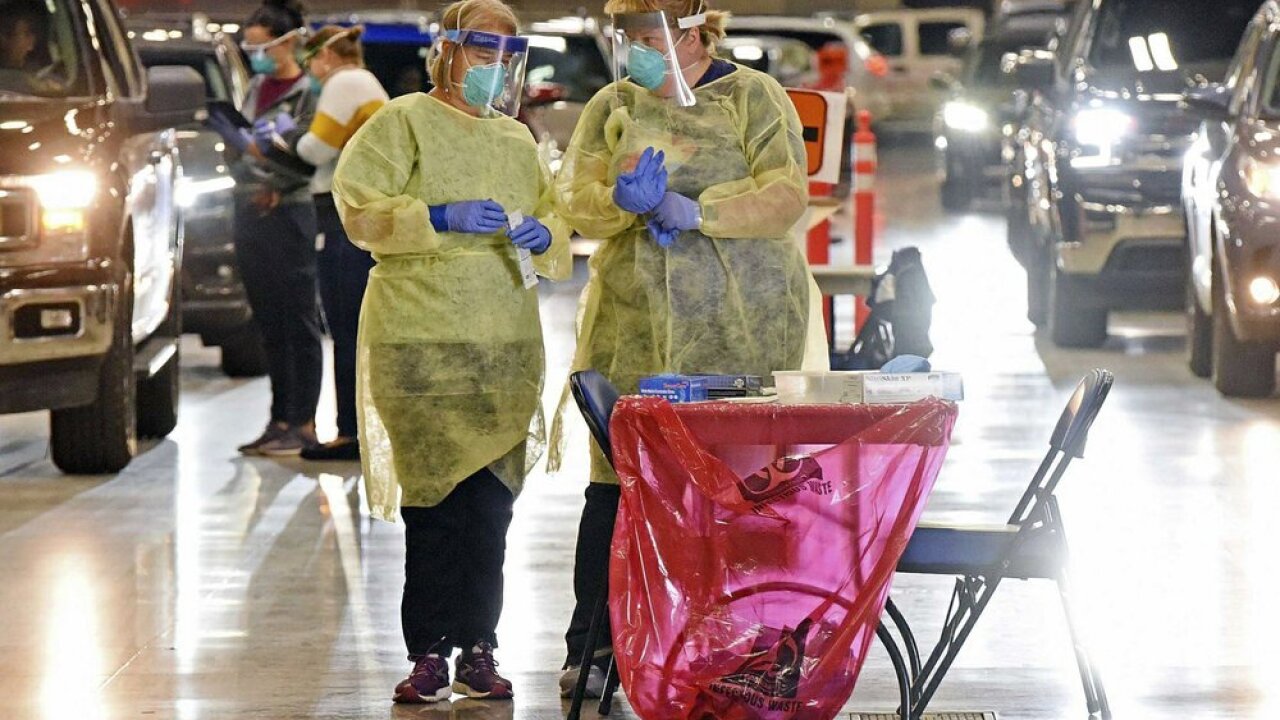 Bismarck-Burleigh Public Health nurses Crys Kuntz, left, and Sara Nelson confer inside the Bismarck Event Center on Tuesday, Sept. 8, 2020, in Bismarck, N.D., where vehicles were lined up for the weekly drive-thru COVID-19 testing. Coronavirus infections in the Dakotas are growing faster than anywhere else in the nation, fueling impassioned debates over masks, personal responsibility and freedom after months in which the two states avoided the worst of the pandemic. (Tom Stromme/The Bismarck Tribune via AP)

SIOUX FALLS, S.D. (AP) — Coronavirus infections in the Dakotas are growing faster than anywhere else in the nation, fueling impassioned debates over masks and personal freedom after months in which the two states avoided the worst of the pandemic.

The argument over masks raged this week in Brookings, South Dakota, as the city council considered requiring face coverings in businesses. The city was forced to move its meeting to a local arena to accommodate intense interest, with many citizens speaking against it, before the mask requirement ultimately passed.

Amid the brute force of the pandemic, health experts warn that the infections must be contained before care systems are overwhelmed. North Dakota and South Dakota lead the country in new cases per capita over the last two weeks, ranking first and second respectively, according to Johns Hopkins University researchers.

The states have also posted some of the country’s highest positivity rates for COVID-19 tests in the last week — nearly 22 percent in North Dakota — an indication that there are more infections than tests are catching.

Infections have been spurred by schools and universities reopening and mass gatherings like the Sturgis Motorcycle Rally, which drew hundreds of thousands of people from across the country.

“It is not a surprise that South Dakota has one of the highest (COVID-19) reproduction rates in the country,” Brookings City Council member Nick Wendell said as he commented on the many people who forgo masks in public.

The Republican governors of both states have eschewed mask requirements, tapping into a spirit of independence hewn from enduring the winters and storms of the Great Plains.

The Dakotas were not always a hot spot. For months, the states appeared to avoid the worst of the pandemic, watching from afar as it raged through large cities. But spiking infection rates have fanned out across the nation, from the East Coast to the Sun Belt and now into the Midwest, where states like Iowa and Kansas are also dealing with surges.

“People have a tendency to become complacent,” he said. “Then they start to relax the things that they were doing properly, and that’s when the increase in cases starts to go up.”

Health officials point out that the COVID-19 case increases have been among younger groups that are not hospitalized at high rates. But infections have not been contained to college campuses.

“College students work in places where the vulnerable live, such as nursing homes,” said Dr. Joel Walz, the Grand Forks, North Dakota, city and county health officer. “Some of them are nursing students who are doing rotations where they’re going to see people who are really at risk. I worry about that.”

But requiring masks has been controversial. In Brookings, opponents said they believed the virus threat was not as serious as portrayed and that a mandate was a violation of civil liberties.

“There are a lot of things we have in life that we have to deal with that cause death,” business owner Teresa Haldeman told the council. “We live in America, and we have certain inalienable rights.”

Though Brookings passed its ban, another hot spot — North Dakota’s Morton County, just west of the capital city of Bismarck — soundly rejected a mask requirement after citizens spoke against it. Brookings may be the lone municipality with such an order in the Dakotas outside of Native American reservations, which have generally been more vigilant in adopting coronavirus precautions. Native Americans have disproportionately died from COVID-19, accounting for 24% of deaths statewide.

At a press briefing, Burgum displayed a slide that showed active cases in neighboring Minnesota rising to record levels since implementing a mask mandate July 25.

“In the end, it’s about individual decisions, not what the government does,” he said.

Noem, who has yet to appear at a public event with a mask, carved out a reputation as a staunch conservative when she defied calls early in the pandemic for lockdown orders.

But both governors face increasing pressure to step up their approach. North Dakota’s average rate of test positivity has been nearly 22% over the last seven days, according to the the COVID Tracking Project; South Dakota’s has been 17%.

“You don’t want to start off already with a baseline that’s so high,” Fauci said.

Neither governor appears ready to yield any ground.

“We will not be changing that approach,” Noem spokesman Ian Fury said Thursday, citing a low hospitalization rate and the fact that only 3% of intensive-care beds are occupied by COVID patients.

Doctors in both states warn that their health care systems remain vulnerable. Small hospitals in rural areas depend on just a handful of large hospitals to handle large inflows of patients or complex procedures, said Dr. Misty Anderson, president of the North Dakota Medical Association.

“Now we are adding a surge in coronavirus cases potentially,” he said. “They are worried about being overwhelmed.”