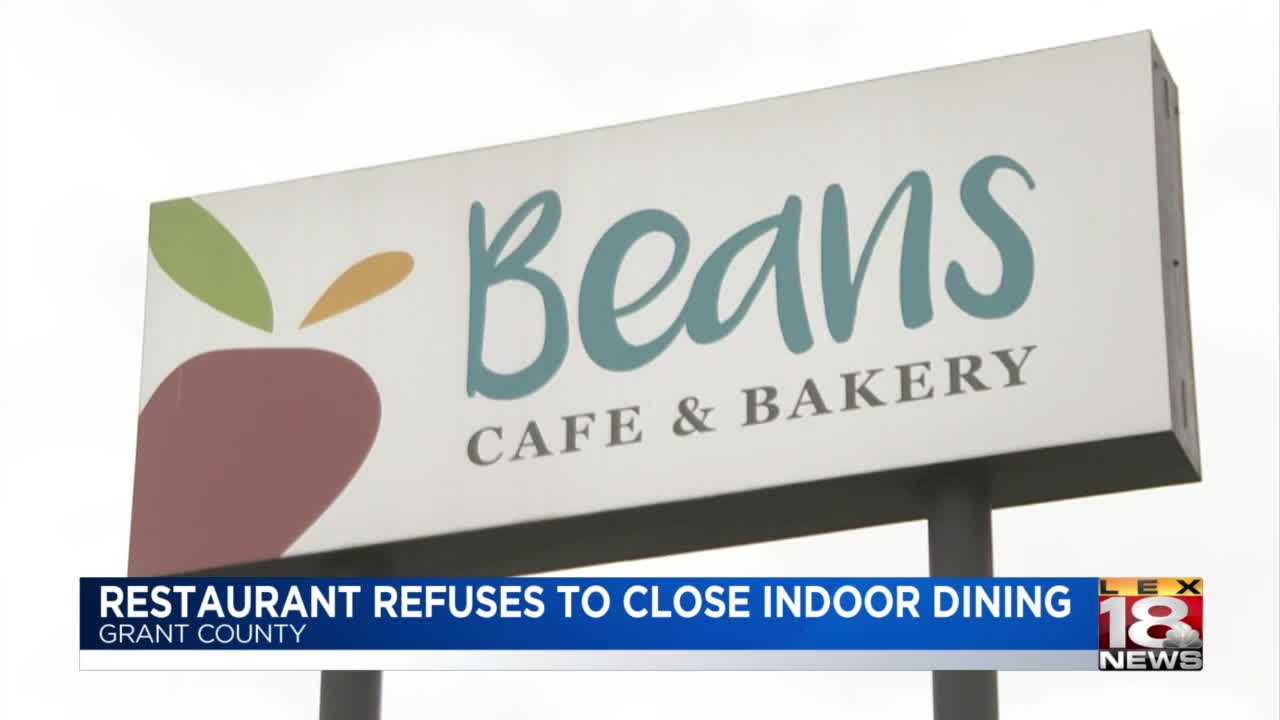 GRANT COUNTY, Ky. (LEX 18) — Despite an executive order requiring restaurants and bars to close their indoor dining rooms and shift to only outside service and carry-out, Beans Cafe and Bakery will keep its doors open.

“For Frankfort to choose whether people can sit in my dining room or have to sit outside under an umbrella is ludicrous and people have the freedom to choose [what to do],” said restaurant owner Richard Hayhoe.

The post has been the subject of controversial debate among community members. In the comments, some have thanked the restaurant for ‘taking a stand’ while others have said they will not be supporting the business any longer.

“If you don’t want to come here, I’m not the only food source in town. You can choose to or not to. We’re about the freedom that you can make your own decision about that,” said Hayhoe.

“We’ve decided that recommendation doesn’t fit the freedom that we believe in,” Hayhoe said about the order that restaurants halt indoor service. “We believe we are operating in a manner that allows people to make a choice and nobody is being forced to eat in our dining room.”

LEX 18 reached out to the Governor’s office to ask how the state plans to enforce the executive order if businesses refuse to follow them.

A spokesperson with the Governor’s office responded with the following statement:

“In the midst of this pandemic, we thank the thousands of establishments that are following the orders to save lives and defeat this virus. While the orders are hard on so many, we are in the midst of an explosion of the virus that threatens to overwhelm our health care systems and decimate our long-term care facilities. Given the Supreme Court's ruling, if an establishment violates the order it is violating the rule of law and all levels of government have a duty to take action.”

“The governor’s orders were, and continue to be, necessary to slow the spread of COVID-19 and protect the health and safety of all Kentucky citizens,” said the Supreme Court.

Hayhoe said he doesn’t believe he is breaking any laws by defying the most recent round of COVID-19 restrictions and keeping his doors open.

“We have a legally established business with a lawful dining room, and you can go in there and enjoy your meal, and we’re not changing that. We believe that we are lawfully allowed to let people into our dining room,” he said. “If somehow this Governor is able to get someone to lock my door when I’m allowing people to sit in my dining room of their own free will, that’s unconscionable. If that’s what happens, then we will deal with that as we are able to at the time that that happens.”

No officials have been to the business to enforce the executive order, according to a manager at Beans Cafe and Bakery.