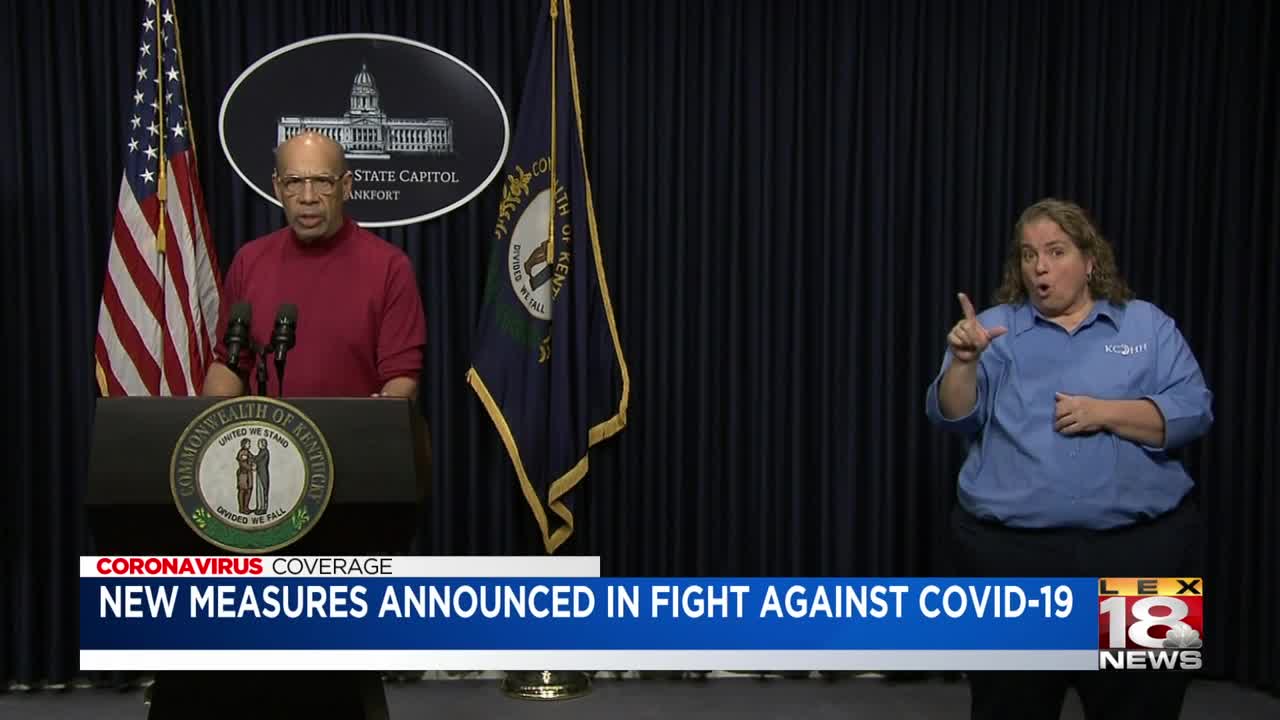 "Where we are in the coronavirus, we will probably be lighting our houses up green mostly every night at least for the foreseeable future," Beshear said. "We know that is how this virus works. We've been ready for it and we've been preparing for it. It comes for the most vulnerable amongst us. Every time you see a green house, city or a university, I hope it reminds you that our actions have consequences. But if we all do our part, we will minimize the number of nights or the number of people this green represent."

Those traveling from outside Kentucky and into Kentucky that aren't just passing through must quarantine for 14 days.

"We have to make sure that we don't have folks that are traveling in, staying two days and leaving," Beshear explained. "If somebody has a family member from out of state and they want to come and ride it out with their family members, that is fine. But once you get here, you quarantine for 14 days."

State, county and city governments can hire back retirees

State, county and city governments can hire back retirees if needed.

"We previously did this for first responders and others," Beshear said. "We're now expanding it because we can see an entire part of state, city or county government ultimately in self-quarantine. With this, we need to make sure we have critical people in place."

No overnight stays in state parks

Starting Friday, there will be no overnight stays in Kentucky's state parks. This includes both the campgrounds and the lodges.

"This is to make sure that we are all healthy at home," Beshear explained. "It is making sure we are not creating opportunities for people to create a crowd and we're not presenting a haven for those coming from other places."

Fairgrounds in Louisville being converted into hospital

Beshear announced that the state is moving ahead to convert the Fairgrounds in Louisville into at least a 2,000 bed hospital. The National Guard will assist in the conversion.

"Our goal is to be ready when the surge comes," Beshear said. "That doesn't mean that we wait until we don't have enough space and try to put it together. We want to learn lessons from watching other states and what they're experiencing."

Select inmates to be released

The sentences of 186 inmates in the state of Kentucky will be shortened to try to slow down the infection among those most at-risk.

The 186 inmates were screened based on CDC guidelines for those most susceptible to the virus. Every inmate will be screened for symptoms of the coronavirus before being released. Each inmate must also have a residence they can move into and will have to quarantine there for 14 days.

All inmates 186 of those inmates are serving sentences for Class C or D felonies.

"One is to protect those who are and have been incarcerated," Brown said. "And the other is to help protect those men and women who are serving on behalf of the state as our correctional officers and other workers in our institutions."

It will likely be the first of two waves of early releases, with the second wave involving 743 inmates.