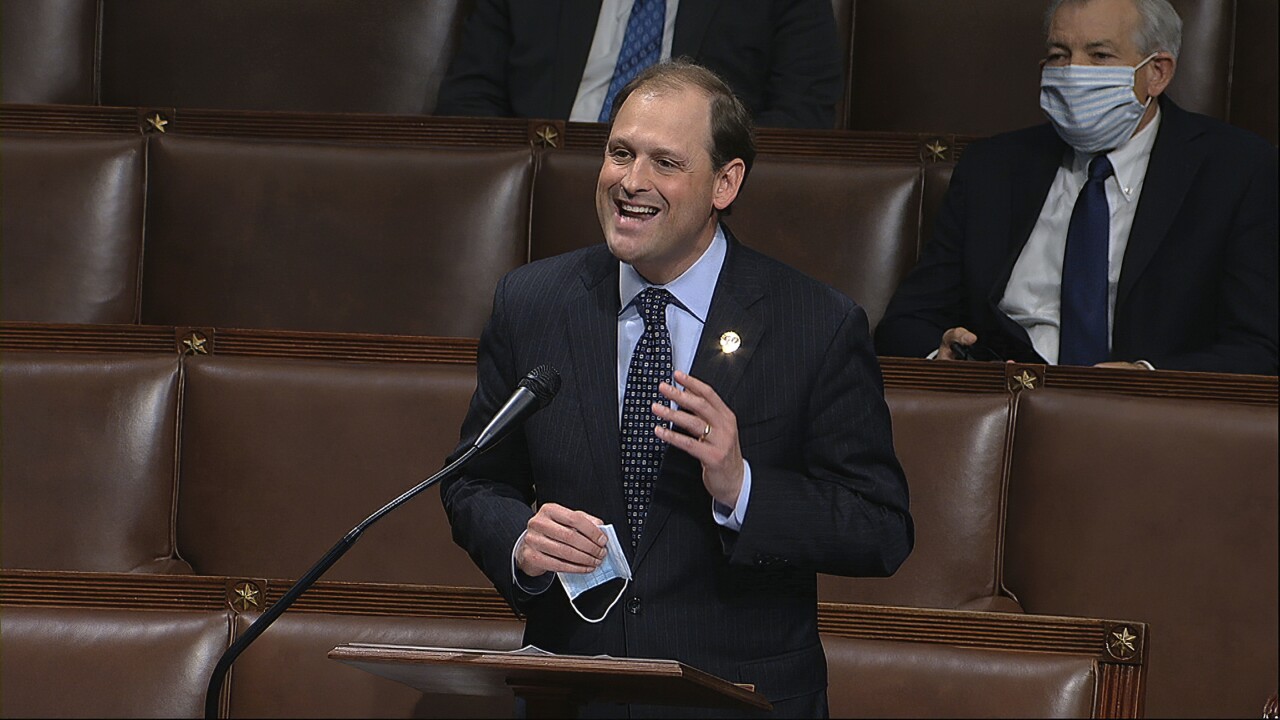 AP
In this image from video, Rep. Andy Barr, R-Ky., speaks on the floor of the House of Representatives at the U.S. Capitol in Washington, Thursday, April 23, 2020. (House Television via AP)

As part of the restrictions, starting Friday, Nov. 20 at 5:00 p.m. until Dec. 13 at 11:59 p.m., private gatherings will be limited to eight people, attendance at venue spaces will be limited, and bars and restaurants will be closed for indoor service.

In a statement, Barr said the restrictions would have a "devastating and irreversible impact on Kentucky small businesses and their employees."

Governor Beshear’s sweeping new COVID-19 restrictions announced today will have a devastating and irreversible impact on Kentucky small businesses and their employees. Accordingly, I call on the Governor to do more than his empty gesture to set up a paltry (1/3)

"Governor Beshear's sweeping new COVID-19 restrictions announced today will have a devastating and irreversible impact on Kentucky small businesses and their employees," Barr said in a statement. "Accordingly, I call on the Governor to do more than his empty gesture to set up a paltry and woefully inadequate bureaucratic assistance program with federal CARES Act funds that should have been spent months ago. Instead, I strongly urge the Governor, on behalf of my constituents who will lose their businesses and their jobs because of his actions, to contact Speaker Nancy Pelosi to demand she immediately end her partisan and reckless obstruction of H.R. 8265, stand-alone legislation I have co-sponsored to provide $135 billion in forgivable loans under the Paycheck Protection Program to distressed small businesses."

Congressman Barr is a co-sponsor of H.R. 8265, which would re-open and expand the eligibility criteria of the Paycheck Protection Program (PPP) to provide forgivable loans to struggling small businesses. He joined 184 of his Republican colleagues in signing a discharge petition to attempt to force a vote on the bill.

According to data from the Small Business Administration, through the PPP, over 5.2 million small businesses nationwide received loans, totaling over $525 billion. In Kentucky, 50,655 small businesses received more than $5.28 billion in loans.

The House has yet to vote on the measure.

"Now is not the time for our leaders and public servants to play politics with people's lives or refuse to take science seriously," said Colmon Elridge, Kentucky Democratic Party Chair.

"Every decision the governor has made regarding the COVID-19 crisis has been made after consulting public health experts and taking into consideration any state actions impact on schools, businesses, our ability to come together as families to celebrate or mourn, and our ability to return to places that nourish our spirits such as churches and houses of worship. These decisions, while not easy, have been made because of the clear evidence about the spread of the virus in our communities. I also know that Governor Beshear understands and respects the enormous financial, emotional, and mental toll the pandemic has had across the Commonwealth.

"As a citizen, it has pained and frankly angered me to see this public health crisis politicized. As a country and as a Commonwealth, we once respected the idea that in times such as these, science, not partisanship, would define our outcomes. Now is not the time for our leaders and public servants to play politics with people's lives or refuse to take science seriously. People are dying. Small businesses are hurting. Communities of color and communities with lack of access to quality and affordable healthcare are disproportionately suffering and dying.

"Like most parents, my wife and I would love nothing more than for schools to be open as they were this time last year. Yet as parents, we know too well the worry of sending our children safely to school. We hear the voices of educators worried about the health risks of coming to school or driving a bus and contracting COVID or worse, transmitting it to a loved one.

"This is not who we are and it does not have to be this way.

"Let me be clear, wearing a mask is not a political statement. It is not living in fear. The scriptures tell us to love one another and simply put, wearing a mask, even if inconvenient, is the kind of act of selflessness and love for our neighbors, we are called upon to, as people of faith, as members of a community, and as human beings, to live out. The quickest way to return to a more "normal" existence, is to listen to fact based science and to follow the recommendations that are being made. Anyone who prefers to peddle in misinformation for their own personal agenda needs to work with Governor Beshear, not against Kentuckians. Governor Beshear, and other governors from both sides of the aisle, have put politics aside to continue to save lives, filling the void left by a lack of coordinated federal response. It is time for all Kentucky leaders to do the same.

"The decision could not be more clear. Will leaders stand on the side of life, or will they, as they did in March, stand on the side of partisan, petty, and frankly, deadly politics? The time for grandstanding is over, as every minute so called leaders spend spreading false information and fighting this Governor, is a minute we are losing to COVID-19. I am glad to have leaders like Governor Beshear and Lt. Governor Coleman, who refuse to wave the white flag to COVID-19. Defeatism is not who we are as Kentuckians or as Americans. I hope leaders on both sides of the aisle will show the same resolve."