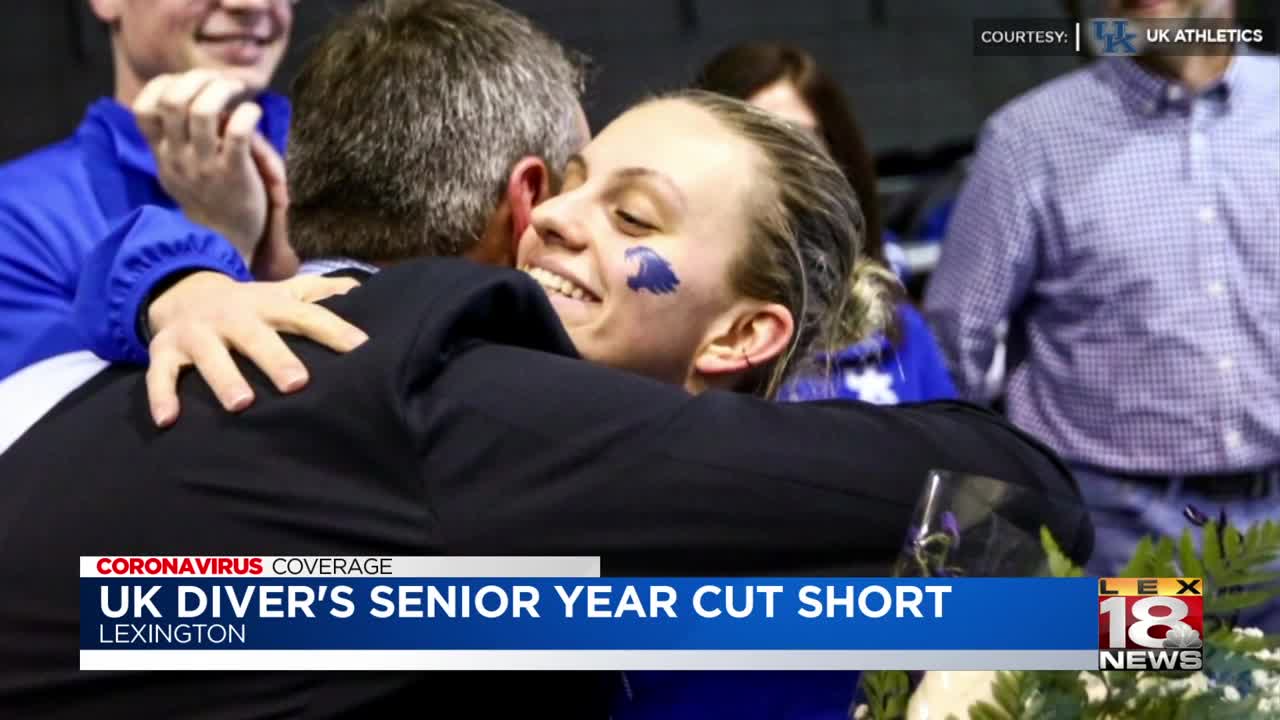 LEXINGTON, Ky. (LEX 18) — On March 12, when UK senior diver Emma Dellmore approached the board at the NCAA regional competition, she had a feeling the end was near.

"I was trying to keep all of the negative thoughts out and just kind of cherish what was going on in that moment. It was just more happiness than anything," said Dellmore.

She says while COVID-19 was in the back of her mind, she tried to celebrate even making it to that moment. That is because a freak accident about 14 months prior nearly ended her career.

"I shot straight up in the air and straight to the side, standing onto the concrete. So I landed flat feet first on the concrete," said Dellmore.

Dellmore broke both her feet in a tumbling mishap at the team's practice facility. She used a wheelchair for more than two months.

"I would get down on myself, and I just wanted to quit. I'd sit there and say I don't want to do this anymore; I don't want the wheelchair. I just want to get up and walk. This is gonna take forever," said Dellmore.

She credits her coach and teammates for helping her make the comeback of a lifetime.

Dellmore went on to have a successful senior season, qualifying for the finals in the 1m in the NCAA Zone C Diving Championships. She had the chance to achieve her dream of going to the national championships.

"My coach being there and everybody cheering when I came up above water it was just a great feeling. I had overcome so much," said Dellmore.

But as fate would have it, the coronavirus had other plans.

"We made it to the second round, and that's when I heard everybody say it's over, it's canceled, they're going to cancel the whole competition. At that point, I was like alright, this is the end," said Dellmore.

Shortly after, UK announced campus would remain closed for the rest of the school year. Her team's swimming and diving banquet were canceled.

The Kentucky Athletic Department's CATSPY awards were held online. Dellmore would have been on stage receiving the "Blue Heart" award for her determination.

"We're all together, and everybody looks great, and it's a really fun celebration. So I think it would have been really exciting to go," said Dellmore.

"All of a sudden it was 'poof' it was just gone. And so I think that was hard," said Dellmore.

Dellmore says while it's not the goodbye to Kentucky that she had hoped for, she's grateful for the memories.

"It was great to be a wildcat and know that I always will be one," said Dellmore.

And she's ready to take on the next challenge: nursing school in the fall.

Dellmore says the pandemic has only reaffirmed her desire to become a nurse and to help people.