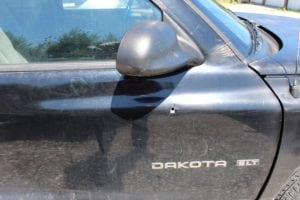 LAUREL COUNTY, Ky (LEX 18) —  A man has been arrested after a pickup truck travelling on Hal Rogers Parkway was allegedly shot into after an apparent road rage incident.

During the investigation, it was determined that the truck had been shot into. Deputies and detectives located a bullet hole in the passenger door, the tailgate, and a tire. The truck had a driver and one passenger in it.

Deputies determined a possible suspect vehicle and a suspect who lived in Knox County. Deputies and detectives travelled to that location interviewing the suspect and learned from the suspect that he had allegedly shot at the truck numerous times after an earlier argument with the victim that resulted in three total vehicles being involved in the road rage with another vehicle receiving vehicle contact during the incident.