Towing Community Asks Drivers To Move Over, Slow Down

(LEX 18) Nearly 60 tow truck drivers die every year from people hitting them while they’re working on the side of the road. A driver in Louisville is in critical condition after getting hit last weekend. The towing community is asking drivers to move over and slow down.

Brent Greenwell was just doing his job in Louisville last weekend when he was hit by a car. He’s now fighting for his life.

The width of a parking space is all the room a tow truck driver had on the side of the road when trying to do his or her job.

“It’s scary. Something you kind of become numb to, but you gotta be ready at all times,” said Jason Bakay, a heavy-duty tow operator.

They have to be ready for drivers passing by. Bakay said that a lot of drivers don’t move over, slow down, or they are texting.

“I’ve actually had someone take off my mirror before,” he said.

Tow truck drivers tell LEX 18 that they’ve had too many close calls.

The Move Over Law requires drivers to give emergency vehicles and service trucks space.

“Give first responders, tow truck operators, anybody that’s broke down on the side of the road some space,” said Kevin Flanigin, the chief operating officer at Roberts Heavy Duty Towing.

Kentucky State Police are on the lookout for violators of the Move Over Law. In 2017, they issued 227 citations. 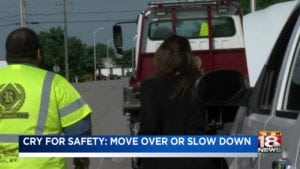