(LEX 18) — It was almost a year ago that LEX 18 spoke with a Kentucky native who was living in Texas after he was evacuated because of Hurricane Harvey.

Mike Crosby and his family evacuated from Flour Bluff Island near Corpus Christi.

“We boarded the house up and got all our pictures and valuables,” said Crosby.

Now, they live back in Central Kentucky. They told LEX 18 about the devastation they came back to when they returned to the island after Hurricane Harvey.

“A lot of places didn’t have electric, some places were still dealing with flooding, roads were blocked, so it was a lot of chaos for a while,” said Crosby.

He thought their newly built privacy fence would help protect their home, but even it was thrown across the yard when they got back.

“It snapped it off right at the concrete, just like breaking a toothpick, just the whole fence,” he said.

Despite the damage, the family says they’re lucky they didn’t have nearly as much damage as the neighboring communities like Rockport.

“RVs still upside down, there was a big boat barn with boats just suspended in air hanging, so it was unbelievable. You couldn’t imagine,” he said.

Crosby said he is glad they evacuated when they did.

“The people told us, ‘Oh it won’t be that bad,’ well, it jumped like two categories in a day’s time so we almost didn’t get out of there in time,” said Crosby.

He said for some, even a year later, their troubles aren’t over.

“There’s still a lot of people that still have a lot of problems down there,” he said. 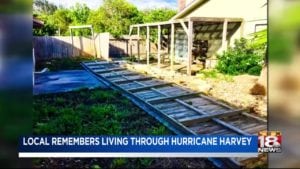