LEXINGTON, Ky (LEX 18) Three people were taken to the hospital Thursday evening after a crash near downtown Lexington. 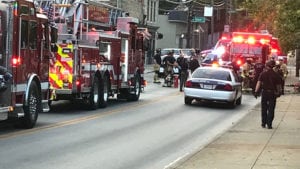 Police say it all started a little after 7 p.m. when an officer made a traffic stop on Third Street near Elm Tree Lane.

When the officer got out of the car, police say the driver took off. Police say he ran several red lights.

The officer did not give chase, but a short time later, police say the car hit a brick wall on Third Street near North Limestone.

All three people inside the car were taken to the hospital to be treated for non-life-threatening injuries.

Police say that the driver could be charged with assault since there were passengers in the car.

Officers say that a stolen gun was also found inside the car.