ANDERSON COUNTY, Ky (LEX 18)– An Anderson County man says that someone stole tens of thousands of dollars worth of his belongings out of his garage.

Justin Buntain purchased a new 2018 Polaris Blazer Turbo 1000 recently. He bought the new side-by-side just in time for his family’s annual Labor Day trip to cabins only reachable with ATVs or side-by-sides.

Last Wednesday night or early Thursday morning, Buntain said that his Blazer, his chainsaws, his weed-eater, a battery charger, and an LED light bar off of his wife’s Jeep were all stolen from his garage.

He believes that the thief unscrewed the back of his garage, lifted the panel, and crawled on inside.

Since Buntain’s friends posted on Facebook about what happened this week, others reached out with recent vehicle thefts in the area as well. Two John Deer gators and a truck are now missing.

For Buntain, he lost more than just his sense of security and possessions. He had to tell his kids that without their vehicle, they won’t be going on vacation.

Buntain is offering a $1,000 reward for someone to find his stolen items. 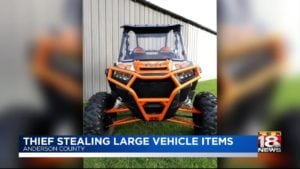