SCOTT COUNTY, Ky. (LEX 18) — A Scott County family is trying to find the driver who they say caused a serious three-vehicle crash that severely injured their loved one.

Deby Oliver was looking forward to spending Labor Day weekend with her grandkids and family, but Friday evening around 5:30, her plans were put on hold indefinitely.

Bruce Oliver said his wife and other drivers were behind a truck that was driving recklessly. He said that beginning on U.S. Highway 25, it was weaving in and out of oncoming traffic. Then, four miles up the road, Oliver said that the driver slammed on his brakes, causing a serious three-vehicle chain reaction crash that sent his wife head-on into trees just past Deer Run Estates.

“She has a broken sternum, broken ribs and a broken neck,” said Oliver.

Oliver said that the mystery truck kept driving, leaving the three crashed vehicles behind. Scott County deputies have released a photo of the truck that witnesses say is possibly involved and officers would like to speak to the driver. It is doubtful that the person would face charges because the driver didn’t wreck.

Oliver’s family doesn’t want anyone else to get hurt. Deby is telling friends that she will be good as new. Her family hopes so but is frustrated because they say the crash shouldn’t have happened in the first place.

If you know who the driver may be, contact the Scott County Sheriff’s Department. 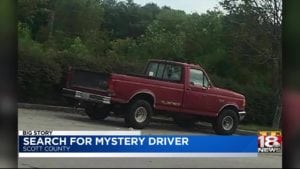