PENDLETON COUNTY, Ky. (LEX 18) — Rescuers say that the Pendleton County pig case is the worst animal hoarding situation they’ve ever witnessed. They’re racing to nurse many of the hundreds of pigs back to health.

This many pigs take muscle to corral.

“They’re powerful,” said Jami Ozubko with Hooves Marching For Mercy. “They’ll climb right up and over you if they want to, you know.” 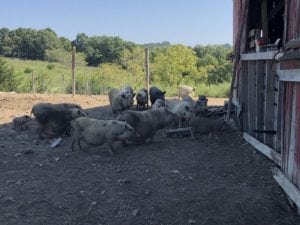 The rescuers are spaying, neutering and vaccinating hundreds of pigs.

Ozubko is one of two Atlanta-based volunteers who drove through the night to Pendleton County to help out.

“They want to be loved, they want the affection, and it’s sad they don’t have it,” said Ozubko.

Jodi Vigar Dawson with Atti’s Acres Pig Rescue said some of the 500-plus pigs will be going to animal rescuers later this week. She said they still need more donations to get the job done, but there’s another shortage they still need help with.

“I have one vet in Kentucky that has given me a break and one in Ohio that I’ve used quite often, and nobody else has stepped up in Kentucky,” said Dawson.

With more vets, more pigs have a better chance to survive and make it to a good home, where rescuers say they can feel the love that they crave.

You can learn more about donating, volunteering, and adopting, here.